Marcell Coetzee will lead Bulls in ‘semifinal’ against the Sharks 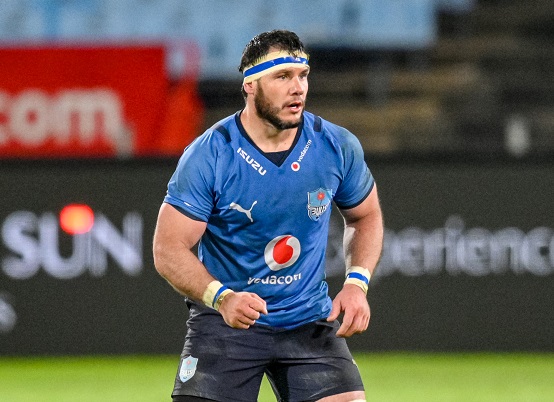 Marcell Coetzee of the Bulls during the PRO14 Rainbow Cup SA match against the Stormers at Loftus Versfeld Stadium on June 4 2021.
Image: Christiaan Kotze/Gallo Images

Springbok loose forward Marcell Coetzee will lead the Bulls in their important Rainbow Cup SA clash against the Sharks at Kings Park in Durban on Saturday evening.

Coetzee, who made a successful return to action last weekend after a long injury layoff, takes over the captaincy from injured Duane Vermeulen, who underwent ankle surgery this week.

The Bulls need to beat the Sharks to secure a place in the final next weekend against Italian side Benetton Treviso, who will be representing the northern hemisphere, at the Stadio di Monigo

Benetton Treviso qualified for the final after their last pool match against Welsh side Ospreys was cancelled due to Covid-19.

Bulls coach Jake White continues to test combinations and positions with Ruan Nortje shifting to blindside flank to open up space for lock Janko Swanepoel to start in the engine room.

Nortje’s move to the side of the scrum is a result of the injury to Elrigh Louw and the rest of the starting line-up remains unchanged.

“We have approached this match as if it were a semifinal. Nothing less than a win is good enough,” White said.

“The boys need no further motivation and despite a few injuries, come Saturday we will be focused and determined to execute our plan.”

Springbok Nizaam Carr and Junior Springbok Muller Uys have received call-ups to take the places of Swanepoel and Van Staden on the bench respectively.

There is plenty of history between the two sides and while the recent past didn’t quite deliver the result the team wanted, Everitt admitted the Sharks go into this match confident in their ability.

“In the last outing at Loftus, we were in the game at halftime and leading. I thought we dominated for 50 minutes but unfortunately unravelled in the last 20 or so and conceded four soft tries, so we have to look at the game as a whole and put it into perspective,” he said.

After losing twice in this competition, the Sharks hit back last weekend to open up the title race and Everitt expects nothing different when his team host the Pretoria side.

“We’ve bounced back before and we haven’t lost to the Bulls at home, so we’re very keen to turn the tables on them at home,” he said.

Taking a good look at his opponents, he added: “The Bulls have improved as well, they’ve found ways to win, they’re a good team, but the result against the Lions gave us a lot of confidence for this game.”

Springbok coach Jacques Nienaber has confirmed that there will be no replacement for injured Duane Vermeulen and that the team are expecting RG ...
Sport
1 week ago

The Sharks set up a potentially thrilling climax to the PRO14 Rainbow Cup SA when they secured a bonus point win over the Lions at Ellis Park on ...
Sport
2 weeks ago