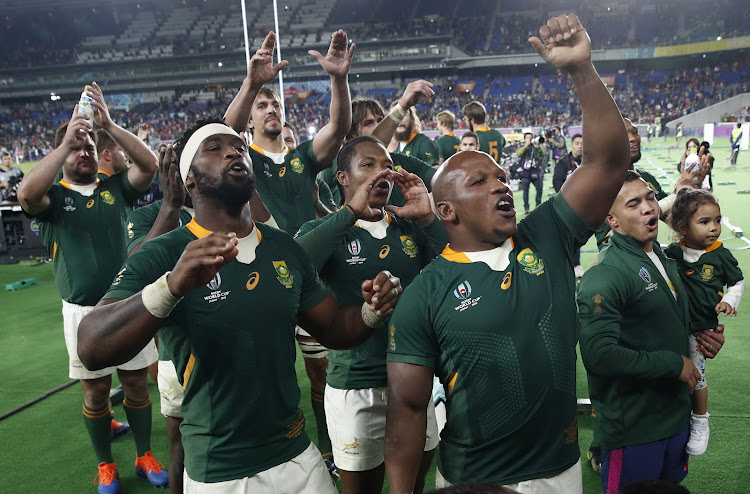 The world champions will play their first international match since the Rugby World Cup final win in Japan in 2019.
Image: Reuters/Edgar Su

South Africa cancelled a planned training session for Sunday after three players tested positive for the Covid-19 virus on the eve on the British and Irish Lions’ departure to the country for a three-test series next month.

First-choice scrum half Herschel Jantjies, prop Vincent Koch and wing S’bu Nkosi were named as the three players but South Africa's director of rugby Rassie Erasmus said he did not think it was a serious matter and it would not impact on two warm-up tests against Georgia or on the Lions tour.

“I don’t think it’s a big cause for concern but we want to keep everybody as safe as possible,” he told a news conference.

“We have followed strict proposals and everyone is isolated at the moment.”

All South African players arriving at their Johannesburg hotel on Saturday underwent coronavirus testing and were not allowed into their rooms unless they had tested negative.

A PCR test returned the three positives cases and they were being re-tested.

Erasmus said he hoped the re-testing would turn out negative with none of the trio showing any symptoms.

“If they are positive it is a case of being unlucky, not anything that they might have done wrong.”

Jantjies and Nkosi had been training with the Boks over the last weeks in Bloemfontein while Koch arrived at the weekend from English club Saracens.

“It is disruptive but it has happened to other rugby teams over the last months and we have enough players in our camp to go ahead with our matches.

"There is no threat to either the tests against Georgia or the Lions tour,” Erasmus added.

The Springboks are in a bio-secure hotel where they are the only residents.

They play two tests against Georgia on July 2 and 9, their first since they lifted the Rugby World Cup in Japan in November 2019.

The Lions leave for South Africa on Sunday for their eight-game tour, starting on Saturday against South Africa’s Johannesburg-based Lions franchise.

The three test matches against the Boks will be played on consecutive Saturdays from July 24.

South Africa is in the grip of a third wave of Covid-19 infections, led by the Delta variant that was first discovered in India, with President Cyril Ramaphosa scheduled to address the country later on Sunday where he is expected to announce tighter lockdown regulations.

Australia's series-opening test against France next month has been moved to Brisbane in the wake of Sydney's two-week Covid-19 lockdown, Rugby ...
Sport
1 year ago

The SABC on Thursday night launched its long-awaited 24-hour sport channel under the tagline ‘Remember the Unforgettable’, referring to the iconic SA ...
Sport
1 year ago

Four doctors are blazing a trail in sports medicine and have established themselves as the go-to guys that various sporting organisations in the ...
Sport
1 year ago

The British and Irish Lions beat Japan 28-10 in the warm-up for their SA tour yesterday but the match was overshadowed by a shoulder injury for ...
Sport
1 year ago

Blast from the past: Stransky drops Boks to 1995 World Cup glory