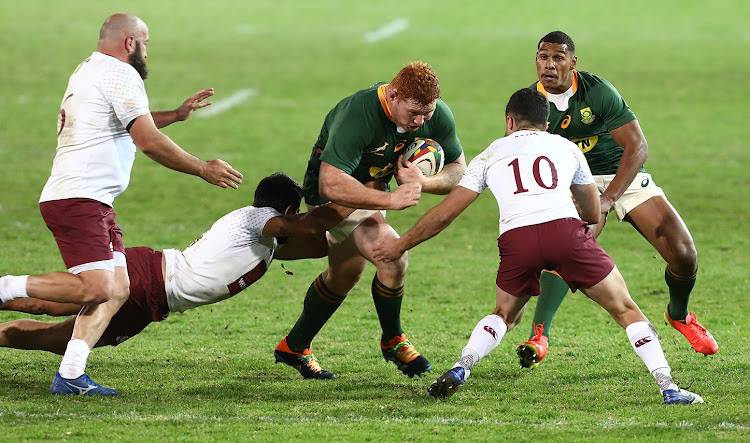 Steven Kitshoff of the Springboks tries to make his way past Georgia players in the first Test at Loftus Versfeld in Pretoria on Friday night.
Image: Masi Losi

Now armed with a point of reference Springbok coach Jacques Nienaber has set his sights on his to-do list for next Friday’s second Test against Georgia at Ellis Park.

His team will need to build on the performance in their first Test since 2019 when they square up against Georgia again, which will also serve as a final dress rehearsal before going into combat against the British & Irish Lions later this month.

Though describing the occasion of his first match in charge of the Springboks as “fabulous”, Nienaber concedes there are many areas they’ll need to improve after their 40-9 victory at Loftus Versfeld.

“Now we have a marker,” said Nienaber after his team emerged from their 20-month absence from the international stage. “It is key to get a marker. In training you are never full out at breakdown, in carries, scrums etc, so it is difficult to get sense of where you are at.”

With the first Test offering them the opportunity to perform a thorough diagnosis Nienaber believes his team must now apply remedies.

“We have to improve in every aspect. In saying that we expected that after not playing for 20 months. It was stop, start and wanted to get cohesion.”

The Georgians, with their familiar in-your-face approach, asked some awkward questions of the Boks in the first half.

“We could not have asked for better opposition that was available,” said Nienaber. “They brought big physicality. That's exactly what we wanted.

“We had to find solutions at halftime. The players found it. We were better in the second half.

“Our discipline was poor in the first half — probably because of pressure from Georgia,” explained Nienaber.

For captain Siya Kolisi, the Boks need to play with greater authority from the get-go next Friday.

“We want to impose our game plan on Georgia as quickly as we can. We left a couple of opportunities out there,” said Kolisi.

To be fair the Boks started to shift through the gears in the second half. They could do so on the back of secure primary phase possession. They routinely won their own line-out ball, they scrummed better as the match wore on and mauled with ferocity towards the end.

They got over a potentially tricky hurdle while handing debuts to Aphelele Fassi, Rosko Specman and Jasper Wiese. Fassi impressed showing composure, dexterity and urgency. He also got to score his first Test try.

“When I played my first Currie Cup game, the same thing happened and when I sat in my hotel bed, I visualised the try,” said Fassi.

“I didn’t think it was going to happen, but then everything happened so quickly and I just decided to back myself. It is something that I will cherish for a long time.”

Of potential concern for Nienaber is the rib injury that prevented lock Eben Etzebeth from starting the second half. The coach did not know the severity of the injury.

There were many peculiarities about the Springboks’ return to the international stage. Because of pandemic-enforced restrictions Loftus could not host a crowd, which meant the Boks could not rely on the fervent and passionate support they would normally get at the venue. It was the worst-attended Springbok Test since 1981 when they beat the USA Eagles in Glenville, New York, under a cloak of secrecy.

There was also the sight of national director of rugby Rassie Erasmus performing water boy duties. Messages that needed to be conveyed were done so expertly.

“We try and think out of the box. Having Rassie is nice for me because he gives me feedback from players. Hats off to him for wanting to do that. Hopefully he will he will do it for the next game,” said Nienaber.

As always‚ the collective mood in South Africa is in need of a lift.
Sport
6 months ago

Georgia have named a largely settled team that boasts four players with more than 50 caps in the starting line-up for their clash against the ...
Sport
6 months ago

A return to form for captain Siya Kolisi is a welcome relief for South Africa coach Jacques Nienaber as he prepares the side for the vital two-test ...
Sport
6 months ago

As you’d expect from a man who drives a hard bargain on the field‚ Handre Pollard has no problem spotting a transaction weighted in his favour off it.
Sport
6 months ago

Back together after almost 20 months the Springbok coach on Tuesday unveiled a squad that features three debutants for Friday’s Test against Georgia ...
Sport
6 months ago