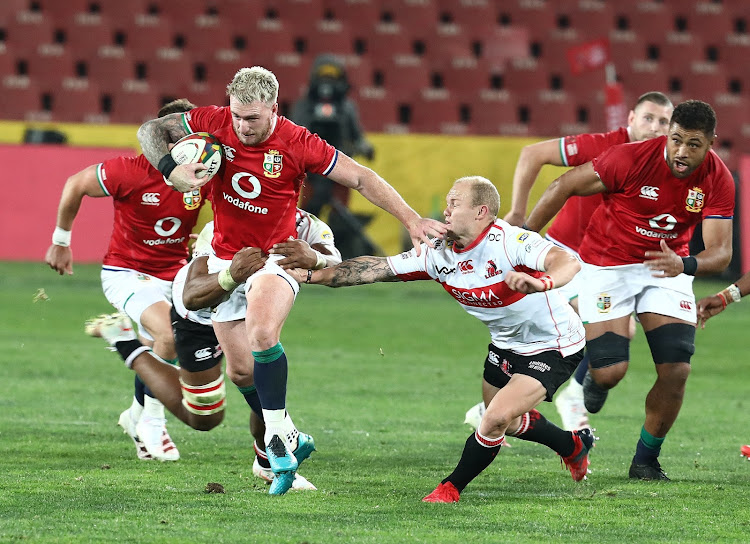 Sun-kissed for the bulk of the day, Ellis Park had by kickoff transformed to a gloomier backdrop as the British & Irish Lions kicked off their tour with a resounding 56-14 win against the Lions.

The doubt, uncertainty and peril that had dictated so much of the pre-tour narrative has for now subsided allowing the visiting B & I Lions to put down a marker for the rest of the tour.

The visitors, high on intensity and purpose, were in control throughout. They ran in eight tries, all converted by Owen Farrell, but ultimately the night ended in personal triumph for Wales left-wing Josh Adams who scored half those tries.

As a collective however, significantly, Warren Gatland’s team showed they are capable of going through the gears, at times playing at a breakneck tempo. Playing at a high tempo will be non-negotiable in the three-Test series against the Springboks with two of those clashes to be played at altitude.

This was never a catfight. The local felines were feeble as the tourists quickly purred to a position of authority.

The home team, who have gone on a rebuild over the last year or so, came into this clash in the hope of clawing back some respectability.

However, not even the arrival of their front row cavalry in the shape of Sti Sithole, Carlu Sadie and to a lesser degree Jaco Visagie in the 50th minute altered the shape of the game. The first time they packed down in a scrum they were penalised.

It was a snapshot of the hosts’ evening.

The home team, who let it be known this week that they would go by the name the ‘Sigma Lions’ for this fixture, may have been better off going by the Simba Lions. Their defence at times had the structural integrity of a bag of crisps.

Apart from a line-out that bordered shambolic, the hosts lacked guile and finesse. It was all too apparent in a period midway through the first half when they laid siege to the tourists’ goalline without finding a decisive opening.

It was their porous defence, however, that contributed to the tourists grabbing the early momentum.

Louis Rees-Zammit followed up a chip that bounced not nearly as kindly as Rabz Maxwane’s attempted tackle. As the youngest member of the tour party it is Rees-Zammit’s responsibility to make sure the tour party’s mascot, Bill, is in safe hands. The Welsh winger displayed the same diligence when the ball was in his possession.

Concerning, though, was the long time he took to get up after being gang-tackled in the 50th minute.

The Lions’ second try-scorer Hamish Watson showed just why he was named Six Nations player of the tournament. His breathtaking industry will make him a player of immense value for the tourists. He took the ball into the first line of defence with undiminished gusto.

As to be expected fullback Stuart Hogg’s incursions were razor sharp, while compatriot Finn Russell adroitly pulled the strings at first receiver.

Whether rugby was the winner on Saturday, or the resolve of the human spirit will stand triumphant at the end of this tour, watching the Lions play continues to stir deep.

Scotland’s Stuart Hogg has perhaps surprisingly been thrown the British & Irish Lions’ captain’s armband for their much-anticipated tour opener in ...
Sport
6 months ago

As always‚ the collective mood in South Africa is in need of a lift.
Sport
6 months ago