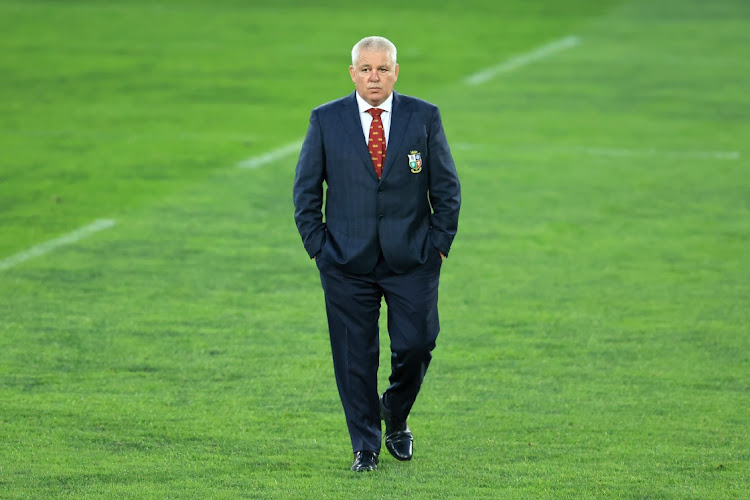 British and Irish Lions head coach Warren Gatland looks on prior to the match at Emirates Airline Park in Johannesburg on July 03, 2021.
Image: David Rogers/Getty Images

British & Irish Lions coach Warren Gatland has a nagging feeling his team might be a little underdone by the time the first Test against the Springboks comes around.

His team drove a stake into the Ellis Park turf with a performance of authority in their tour opener‚ and Gatland's tourists recorded a resounding 56-14 win over the Johannesburg-based Lions.

But Gatland will have been uneasy that his team at times made it all seem too easy.

The home side‚ though eager in attack, didn't adopt the same shoulder-to-the-wheel approach in defence.

It lacked intensity and they fell off tackles too easily.

The hosts' lack of drive and purpose can perhaps be explained by quirk of more contemporary British & Irish Lions tours that the men they encounter at provincial level aren't really competing for Test spots.

Gone are the days when local players tried to catch the eye of the Bok selectors‚ while softening up the men in red.

The British & Irish Lions' preparations are further complicated by the fact that the Springboks and indeed the SA A team players are ring fenced until the games that matter.

Judging from what they encountered in the tour opener‚ the visitors will know they are unlikely to have it that easy against the Springboks.

“I have memories of 2009‚” said Gatland about the tour on which he was an assistant coach to Ian McGeechan.

“We didn't come up against any of the Test players in the warm-up games and we were probably a little underdone.

"We are going to work really hard at training to make sure we have the intensity and physicality that is required.

"There is no doubt some of the games are going to be a little harder‚ hopefully.”

The British & Irish Lions had it so easy in the opener‚ they had to alter the way they went about their business.

“We had to change the way we play because they didn't press us the way we expected.

"That was pretty good reaction. I thought it was a pretty positive start‚” explained Gatland.

Still‚ the coach was satisfied with their initial exertions.

“We put down a bit of a marker but we know as a group we won't be 100% satisfied and with lots of improvement to be made‚” he said after a performance in which his team would have ticked most boxes.

They played with energy and at times a high tempo‚ ingredients that will be crucial against the Springboks‚ especially as the last two Tests of the series will be played at altitude.

Gatland was asked what he made of the Springboks in their hibernation busting first hit out against Georgia last Friday.

“Obviously SA is a bit rusty because they had not played for such a long time.

"They got some dominance and when they got ahead they looked to start playing some rugby.

"There is no doubt they showed what they are capable of doing. They had a driving line-out out‚ stripped strong and (good) individual running.

"That is not something that was unexpected. They will definitely improve next week with the combinations and being back together.”

“We didn't come here just to make up the numbers even though there are a few journalists writing us off saying we are going to get hammered.

"That makes it exciting and I know how motivated this group is to put on the jersey and compete for a Test spot.

“That makes the coach's job so much easier and we are motivated to leave SA hopefully with a Test series victory.”

Sun-kissed for most of the day, Ellis Park had by kick-off transformed to a gloomier backdrop as the British & Irish Lions kicked off their tour with ...
Sport
6 months ago

The British & Irish Lions kicked off their tour at Ellis Park on Saturday.
Sport
6 months ago

New Zealand's 102-2 hammering of an understrength Tonga side might have been described as "a sad state of affairs" by one local newspaper but coach ...
Sport
6 months ago

Sun-kissed for the bulk of the day, Ellis Park had by kick-off transformed to a gloomier backdrop as the British & Irish Lions kicked off their tour ...
Sport
6 months ago