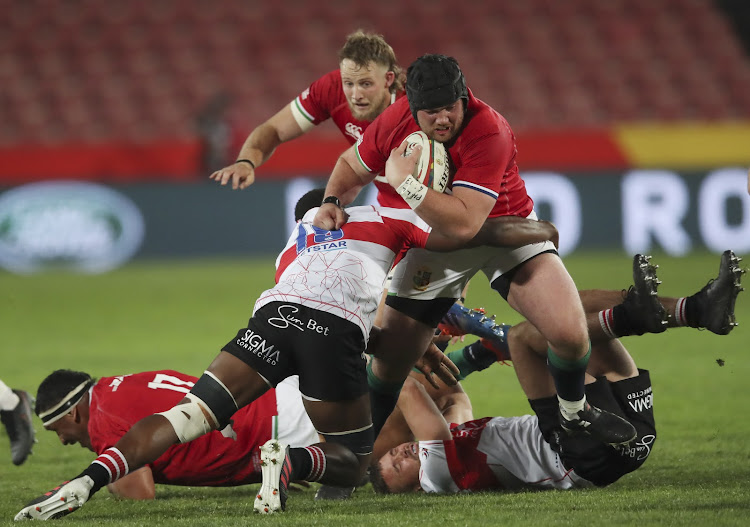 Zander Fagerson of the British & Irish Lions is tackled by Emmanuel Tshituka of the Sigma Lions.
Image: Gavin Barker/BackpagePix

There were some sparkling individual performances as the British & Irish Lions kicked off their tour with a crushing 56-14 win over the local Lions at Ellis Park.

Coach Warren Gatland was pleased all round but there were some personal triumphs‚ most notably for Wales winger Josh Adams who scored four of his team's eight tries.

“The guy on the left wing did OK today‚” Gatland quipped. “He knows where the try line is and you can't ignore what he has done as a player.

Gatland reminded that Adams was the top try scorer at the last World Cup and that he achieved the same feat in the Premiership for bottom of the table Worcester Warriors.

“That kind of speaks for itself. To get four tries would be pretty special for him‚” said Gatland.

Adams‚ sometimes in tight confines‚ made the most of what was offered him but he wasn't the only one who maximised opportunity.

Owen Farrell delivered a flawless performance off the kicking tee banging over from various angles all eight conversions‚ while industrious flanker Hamish Watson bagged the man of the match award.

There were others who caught Gatland's eye. “I was impressed with Courtney (Lawes). He came on into the second row last week and was in the back row in this game. His work rate was great. He does give us options for second row and back row.

“The pleasing thing is we have so much competition. It will be interesting to see next week a different sort of back row with Tom Curry‚ Josh Navidi and Sam Simmonds. That is a pretty exciting back row as well. The competition is huge.”

Gatland is loath to be drawn into speculation about his Test contenders.

“At the moment we are not in a position to try and predict what a Test side would look like.

“We are just going to let that unfold and let the players keep performing. We'll look at the combinations and then we'll start looking at our options.

“We don't want to pigeon hole any players. We are just keeping an open mind about how we play and keep improving.”

He said everyone will have a game so that after three they can start mixing and matching combinations.

Gatland said Ireland's Robbie Henshaw‚ who will be one of the front runners for a Test berth in midfield‚ has a mild hamstring injury.

He added that the players who didn't start in the opener are likely to do so when the tourists play the Sharks at Ellis Park on Wednesday.

Sun-kissed for most of the day, Ellis Park had by kick-off transformed to a gloomier backdrop as the British & Irish Lions kicked off their tour with ...
Sport
6 months ago

The British & Irish Lions kicked off their tour at Ellis Park on Saturday.
Sport
6 months ago

New Zealand's 102-2 hammering of an understrength Tonga side might have been described as "a sad state of affairs" by one local newspaper but coach ...
Sport
6 months ago

Sun-kissed for the bulk of the day, Ellis Park had by kick-off transformed to a gloomier backdrop as the British & Irish Lions kicked off their tour ...
Sport
6 months ago