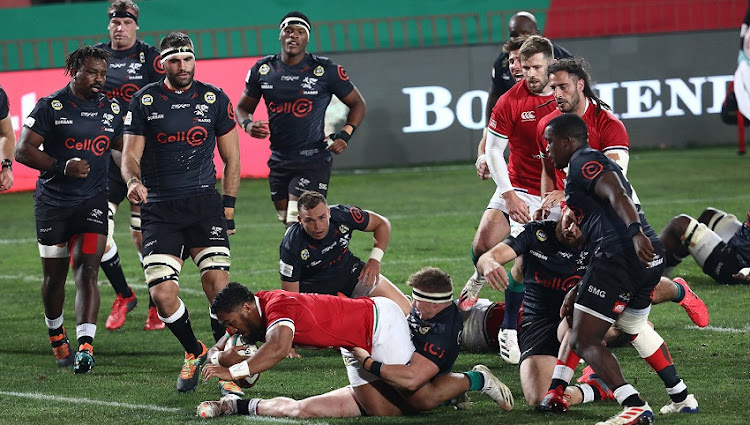 Cell C Sharks players look on as Bundee Aki of the British & Irish Lions scores a try during their clash at Emirates Airline Park in Johannesburg.
Image: Masi Losi

Enforced late changes did little to break the stride of the British & Irish Lions who marched to their second consecutive win on their tour of SA on Wednesday night.

This time they downed the Sharks with a performance that would have satisfied their coaching staff despite the at times disjointed nature of the match. Again vastly superior in thought and execution than their South African opponents, the visitors pretty much set the tone from the outset.

The Sharks, missing nine players who are on national duty, never elevated this clash to the realm of contest.

The match kicked off an hour late and not before the odd cough and sneeze in the Lions' camp presented the organisers a huge headache. A B & I Lions management member returned a positive Covid-19 test and the knock-on effect meant two players and two more management members had to be isolated. Dan Biggar, who was named in the starting line-up, was replaced by Owen Farrell, Anthony Watson made way for Louis Rees-Zammit, while the same applied to Liam Williams who had to stay in allowing Josh Adams to get another start.

The British & Irish Lions will feature three debutants but have kept some of their heavier hitters in reserve for Wednesday's tour match against the ...
Sport
10 months ago

While Biggar is widely thought to occupy the inside lane for the Test flyhalf's berth, the pre-kick-off rearranging of the tourists' deck chairs allowed coach Warren Gatland the opportunity to deploy the more combative Farrell at first receiver.

Farrell hardly put a foot wrong, though he did miss his first kick at goal on tour but only on his 11th attempt.

Adams started where he left off in the tour opener on Saturday by finding his way to the try line, though this time only on three occasions. He has now scored a staggering seven tries in two games.

Left wing Duhan van der Merwe was always going to be a player that will invite lots of local interest and he did not disappoint running in a hat-trick of tries .

He got on to the scoresheet by the sixth minute and was the last player to score a try.

The error-ridden Sharks could not live with the intensity of the visitors. When the Sharks were in possession it was never for long as their ball carrier would soon be suffocated by the attention from a Lions' defender. All too often the ball carrier would be wrapped in the tackle or would try to offload under duress.

British Lions tour match off due to Covid-19 outbreak in Springboks, Bulls camps

The Sharks were denied momentum and the Lions showed a ruthless streak from turnover possession.

Imprecision cost the Sharks, particularly at the ruck where their ball protection was often found wanting.

Phepsi Buthelezi grafted with gusto, Marius Louw frequently found the thick of things, while the game was loose enough for Manie Libbok to involve himself, albeit from the last line of defence.

The scrums in the first half were a mess. Restarts were the order of the day as Lions' loose head Mako Vunipola either losing his footing, or slipping his bind. The Sharks earned two scrum penalties in that half and the Lions hit back with one of their own before the break.

If that is a concern for the tourists there should be none over No 8 Sam Simmonds.

He cracked the nod for this tour ahead of the vastly experienced Billy Vunipola who rather fluffed his lines the last time he played against the Springboks. That just happened to be in a Rugby World Cup final.

Simmonds does not have the taller Vunipola's strapping frame but his game may well be endowed with greater dimension. He's big enough and has an impressive turn of speed.