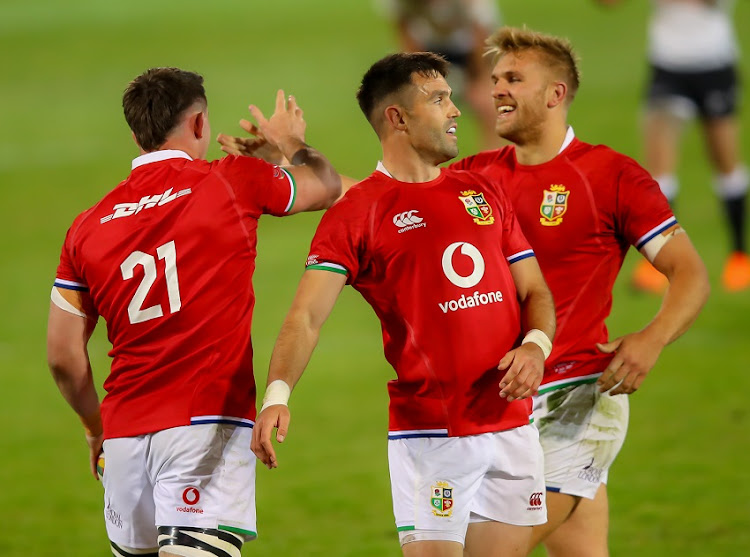 Tom Curry of the British & Irish Lions being congratulated after scoring his try during the Tour match between Cell C Sharks and British and Irish Lions at Loftus Versfeld Stadium on July 10, 2021 in Pretoria, South Africa.
Image: Gordon Arons/Gallo Images

British & Irish Lions coach Warren Gatland wanted sterner opposition for his team in the lead up to the Test series and the Sharks, for one half at least, obliged at Loftus on Saturday.

What was less desirable for the coach was his team did not play with the same level of control as they did in the first two matches but they still managed to rack up a half century for the third consecutive match.

Their path, however, was smoothed in the second half by a Sharks team operating a man short.

Sharks scrumhalf Jaden Hendrikse was an effective disrupter and at times tormentor in the first half but he inexplicably compromised his team by getting sent off for using his elbow in a tackle that had run its course in the 45th minute.

The British & Irish Lions named tour captain Conor Murray on the bench and made 13 changes to their team to take on the Sharks for a second time in ...
Sport
4 months ago

Considering the teams went into the break locked at 26-all, his departure had a profound impact on proceedings, leaving Gatland to pick on the bones of the first half to get a true reflection of his team's performance.

The Lions' backs in particular were guilty of handling errors and it led to three tries for the Sharks who were far more alert to opportunity on this occasion.

The Lions' desire to play at break neck speed resulted in a high error rate but to be fair, the Sharks played with far more urgency and purpose than they did earlier in the week.

In fact, the Sharks were barely recognisable from the team that seemed caught in headlights last Wednesday.

Werner Kok, Dylan Richardson and Phepsi Buthelezi were a frenzied blur of industry. Lionel Cronje introduced a spring in their step at flyhalf, while imbuing those around him with confidence.

For all their pluck the Sharks however left gaping holes in their defence and for a team as adept at playing into space like the Lions, that was criminal.

Add to that Cronje and Hendrikse presenting the tourists an opportunity to counter from deep. The tourists scored first but the Sharks hit back after the Lions' centre Elliot Daly dropped the ball in midfield.

The Sharks pounced with Werner Kok, Marnus Potgieter and Hendrikse featuring prominently in setting up Anthony Volmink with a clear path to the try line. Cronje was prominent in creating the second try.

Richardson barged Dan Biggar out of the way and from the ensuing ruck ball Cronje angled a perfectly weighted grubber.

Thaakhir Abrahams had to watch his step and touch but did both with aplomb to score close to the touch and dead ball line.

The Sharks scored another opportunistic try when Hendrikse intercepted in midfield and ran clear from long range. His instincts betrayed him and his team in the second half however.

Lions roar, but coach not thinking about Test team yet

Rugby officials were locked in talks yesterday to try to salvage the teetering tour here of the British & Irish Lions.
Sport
4 months ago