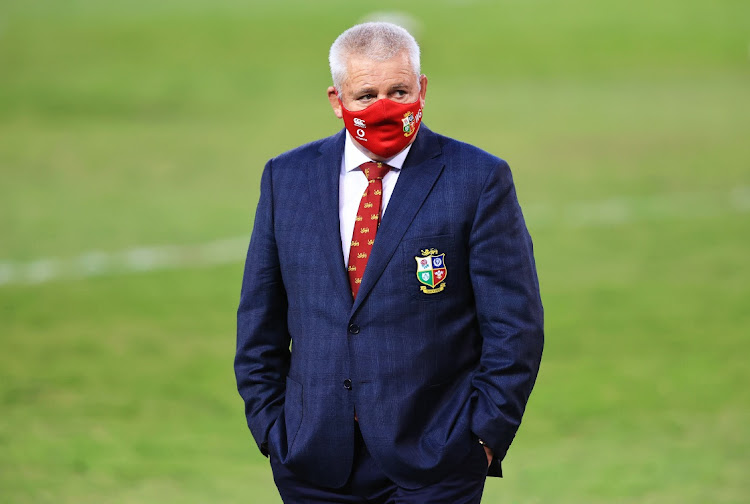 Warren Gatland has said the British & Irish Lions have probably not been tested for 80 minutes like they need to be since they arrived in South Africa.
Image: David Rogers/Getty Images

The British & Irish Lions surged past 50 points for the third consecutive time on tour on Saturday but coach Warren Gatland will have more pressing matters occupying his thoughts on his team's arrival in Cape Town on Sunday.

His team beat the Sharks for the second time in three days‚ but Gatland and his team will be more concerned with keeping Covid-19 infection at bay in their time spent in the Mother City.

Though they have all tested negative‚ the tourists left behind one player and four staff members in Johannesburg as they embarked on the next leg of their drastically altered tour.

As those five remain in isolation until Wednesday‚ more changes may be afoot for the visiting Lions who now look likely to play the Stormers on Wednesday and SA A on Saturday.

The switch in fixtures is necessitated by the Covid-19 outbreak in the Springbok camp with several players and management testing positive last week.

Gatland is hoping his squad can avoid that affliction and the Lions have insisted staff at their hotel in Cape Town check in earlier than originally planned and remain at that facility for the duration of the team's stay.

The length of that stay is now also the subject of debate.

The coach said on Friday that he expects the entire three-Test series to be played in Cape Town‚ away from Gauteng‚ currently still the epicentre of the spread of infection in the country.

That is yet to be confirmed.

An SA Rugby official told TimesLIVE that changing venues from FNB Stadium to Cape Town Stadium will only happen if it is recommended by the Medical Advisory Group.

British & Irish Lions coach Warren Gatland wanted sterner opposition for his team in the lead up to the Test series and the Sharks, for one half at ...
Sport
11 months ago

While staying safe remains a priority‚ Gatland also needs to ready his team for the challenge of playing the 2019 Rugby World Cup champions from July 24.

While his team recorded a 71-31 win against a far more up-for-the-fight Sharks in Pretoria‚ he will know they were flattered by the scoreline.

They played against 14 men for the last 35 minutes after Sharks scrumhalf Jaden Hendrikse elbowed the clash from the realm of contest‚ to cruise.

“The Sharks brought it to us in the first half but we probably have not been tested for 80 minutes like we need to be. Hopefully we are going to get that in the next two games.”

The Sharks feasted on the visiting Lions' errors and stayed in the game with their pluck and wherewithal until Hendrikse brought a rather dramatic shift in proceedings.

Some of the Lions' first half frustrations were self inflicted.

“We caused a few of our own problems with some of the turnovers‚ a couple of intercepts and some poor passes (that) allowed them into the game.

“We were a bit edgy and untidy‚” said Gatland.

Their desire to play an offload game at high tempo invited errors that they are unlikely to repeat in the Test series.

Meanwhile‚ the Springboks will resume training on Sunday in preparation for the Test series after six rounds of Covid-19 testing and a six-day preventive self-isolation period cleared a large group of players to return to the field.

All the players and management who had Covid-19 tests on Saturday returned negative results‚ which paved the way for the players to train on Sunday.

Rugby officials were locked in talks yesterday to try to salvage the teetering tour here of the British & Irish Lions.
Sport
11 months ago

The British & Irish Lions named tour captain Conor Murray on the bench and made 13 changes to their team to take on the Sharks for a second time in ...
Sport
11 months ago

The British & Irish Lions tour of South Africa was thrown into jeopardy on Wednesday when a member of the Lions' tour management tested positive for ...
Sport
11 months ago

After their tour opener British & Irish Lions coach Warren Gatland raised the spectre of his team going into the first Test against the Springboks ...
Sport
11 months ago

Victory for the British & Irish Lions in their clash against the Sharks at Loftus was never in doubt.
Sport
11 months ago