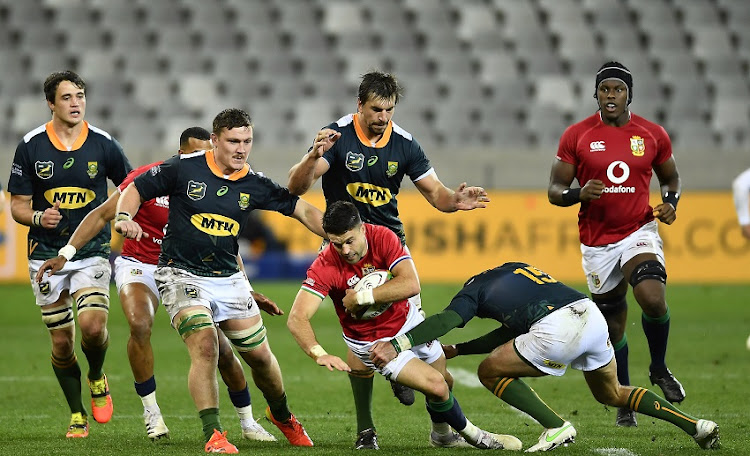 Captain Conor Murray of the British & Irish Lions during the match against South Africa A at Cape Town Stadium on July 14 2021.
Image: Ashley Vlotman/Gallo Images

SA A made it clear this match was less about the result and more about following their process.

The British & Irish Lions should have known what was coming from this shadow Springbok team who held on for a nervy 17-13 at Cape Town Stadium on Wednesday night.

It was the Lions' first defeat of the tour.

The South Africans' physicality in the first half knocked the visitors out of their stride following three comfortable victories at the start of the tour.

There was little of the tempo or flow that proved hallmarks of the Lions' performances on the Highveld. They simply were not allowed the time on the ball they had earlier on the tour and had to resort to stabbing the ball into space with the boot but not always with the desired result.

Rassie Erasmus has strongly dismissed suggestions that the integrity of the British & Irish Lions series is in question after a spate of Covid-19 ...
Sport
6 months ago

The South Africans pummelled the tourists in the first half and they were again forced into some rearranging.

When the visitors did have the ball for a sustained period close to the end of the first half, they were repelled by belligerent South African defence.

Pieter-Steph du Toit, Franco Mostert, Eben Etzebeth, Damian de Allende and Lukhanyo Am's toiled tirelessly, while Cheslin Kolbe fizzed when he got on or near the ball. Rookies hooker Josef Dweba and No 8 Jasper Wiese also left their mark. In the 38 minutes he was on the field Dweba made some powerful surges, while Wiese brings an exasperating nuisance factor, for the opposition.

Du Toit left the field after a blow to the head and the severity of his knock is not clear yet.

The South Africans' poor discipline, however, helped provide the visitors a foothold after the hosts had a 17-3 lead at the break.

With Faf de Klerk and Marco van Staden serving concurrent banishments to the sin bin the Lions felt emboldened. They kept the South Africans scoreless in the second half. The Lions will be equally encouraged by their performance in the scrum.

Tom Curry got through a mountain of work, Maro Itoje is growing an arm and a leg, Conor Murray got some valuable game time, while Elliot Daly is playing with greater assurance.

A barely disguised Springbok team will run out for South Africa A when they take on the British & Irish Lions at Cape Town Stadium on Wednesday.
Sport
6 months ago

The Test berth at flyhalf is still up for grabs, though.

Owen Farrell had some early mishaps. It was his kick that was charged down by Etzebeth that led to a try for S'bu Nkosi inside the first quarter.

Farrell was included in the team at the eleventh hour after Dan Biggar picked up a knock in training.

Wyn Jones leaving the field early in the second half would have been a worrying sight for Lions coach Warren Gatland. Of concern too would have been the injury that forced three utility back Liam Williams off the field barely after the start.