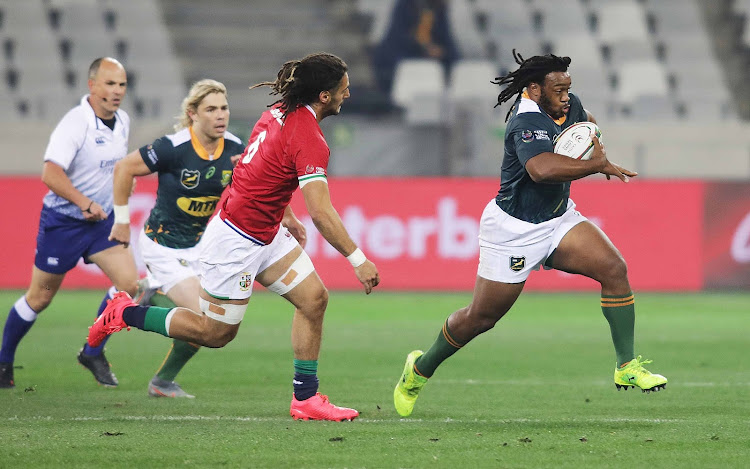 Action from the clash between South Africa A and the British & Irish Lions at Cape Town Stadium on July 14 2021.
Image: ESA ALEXANDER/SUNDAY TIMES

British & Irish Lions coach Warren Gatland reached for the truism that you learn more in defeat than victory after his team's clash against South Africa A in Cape Town.

The Lions started slowly but played with more cohesion and purpose and finished the stronger team by the time the final whistle sounded with the score 17-13 in the South Africans' favour.

Still‚ the visiting coach was sanguine.

“I thought we got more out of [Wednesday night] than South Africa‚” said Gatland about Wednesday night's game. “The players were pretty bullish in the changing room.”

While the defeat was the Lions' first on this tour‚ Gatland said he was proud of the way his team came back from 17-3 down at halftime.

Aided early in the second half by a SA A team down to 13 men as a result of yellow cards‚ the tourists had their hosts on the back foot for the remainder of the match.

“We finished the stronger team and they wilted a bit‚” said Gatland.

“We got over their line a couple of times and had two tries disallowed and we had a kick charged down which enabled them to score a try. There were also one or two decisions which did not go our way.”

Although the players the South Africans deployed for this game closely resembles their likely team for the first Test‚ Gatland perhaps has more leeway to find combinations before the first Test‚ Saturday week.

Crucial will be the arrival of original tour captain Alun Wyn Jones who has miraculously recovered from a shoulder injury he sustained against Japan before the team flew out.

Ireland's Conor Murray was handed the reins but the captaincy issue will be addressed after Jones arrives in Cape Town. “We will sit down with him and Conor and decide‚” Gatland said.

While Rassie Erasmus‚ who coached the SA A team in the absence of Springbok coach Jacques Nienaber‚ believes there is tactical detail the Boks still need to iron out‚ Gatland too is planning for more revision to their blueprint over the next week or so. Not that they completely showed their hand on Wednesday evening.

“There are some plays that we have been working on and we will keep working on them leading up to the Test matches. It’s important to keep a few things back.”

South Africa A made it clear this match was less about the result and more about following their process.
Sport
1 week ago

Original tour captain Alun Wyn Jones will return to the British & Irish Lions tour group after being given the all clear.
Sport
1 week ago