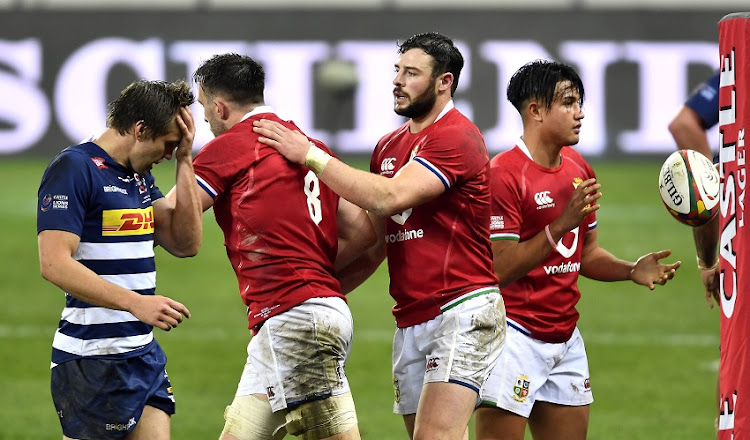 Jack Conan of The British & Irish Lions and teammates celebrate during their match against the Stormers at Cape Town Stadium on July 17 2021.
Image: Ashley Vlotman/Gallo Images

While the Springboks will largely try to revert to the fit and able among their tried and tested in their selections‚ the British & Irish Lions will survey a landscape less cloaked in Covid-19.

The teams clash in their long- and much-anticipated first Test in Cape Town on Saturday and naturally their selection strategies will to a large degree hold the key to the outcome.

Even before Covid-19 brought disruption‚ the Springboks would have had clarity around their selections. The Lions, however, are a team that is traditionally forged in the furnace of tour battles but so far they have not seen much by way of a blowtorch. Apart from their only defeat on tour — against SA A — the Lions have been rampant‚ producing many sparkling performers.

From a South African perspective it is hoped B & I Lions coach Warren Gatland will be blinded by the light and blunders in his selection. That, however, is unlikely. Raised in New Zealand's cattle country‚ Gatland can tell his Angus from his Shorthorn.

In some areas like prop‚ lock and scrumhalf, his thoughts may be clearly distilled‚ but he is spoilt for choice elsewhere.

South Africa flyhalf Handre Pollard insisted his side will be ready for the British & Irish Lions test series, which starts on Saturday, despite ...
Sport
1 year ago

His back row in particular is an area in which he is likely to agonise. Hamish Watson‚ Tom Curry‚ Courtney Lawes‚ Taulupe Faletau and Sam Simmonds are vying for the three starting berths. Watson‚ the Six Nations' player of the tournament‚ is a tireless toiler and gainline basher who is guaranteed to leave an impression. Curry has a work ethic and rate that assures a wide range of influence. He doesn't just get his team going‚ he stunts the opposition.

Gatland is too familiar with Faletau as a bruiser in the Wales back row‚ while Simmonds‚ a surprise tour selection ahead of Billy Vunipola‚ brings energy and thrust that is perhaps best suited for deployment from the bench.

In Courtney Lawes‚ the coach has a player with a second rower's dimensions and engine but fitted with an after-sales Sat Nav. Moreover‚ he will match the South Africans in the physicality stakes and will likely play bumper cars with the Boks until something gives.

Wyn Jones‚ Jamie George‚ Tadgh Furlong‚ Maro Itoje and Alun Wyn Jones are most likely to make up the Lions' tight five‚ though against the Stormers‚ Luke Cowan-Dickie played with the vibrancy a coach demands if he is going to be convinced of a last-minute change of heart. He may get the nod ahead of George.

Though he is down on game time‚ captain on arrival Conor Murray will likely start but Scotland's Ali Price is the form scrumhalf on tour.

Flyhalf may be a head scratch for Gatland. Dan Biggar was said to be the most likely Test starter upon their arrival but like Murray he is short on game time. Finn Russell‚ as his name loosely suggests‚ has again seamlessly transitioned between optical marine threat and backyard terrier‚ while Marcus Smith headlined on his arrival at Cape Town Stadium.

Like Biggar‚ Owen Farrell has a boot not easily ignored at the highest level. He may of course slot into the No 12 jersey but that may take from their ability to set up play in midfield. Ireland's Robbie Henshaw is also down on game time but the man who made his Test debut at fullback is the most impactful tourist at second receiver.

Elliot Daly might have boarded the Lions' southbound plane as an outsider for Test selection but he does provide points of difference that may yet prove crucial in the series. His long-range left boot in particular can be useful when the margins are tight.

Like the back row‚ the back three is an area the Lions appear overstocked. If it is Gatland's intention to engage the Springboks in aerial combat the Wales' axis of Liam Williams‚ Louis Rees-Zammit and Josh Adams are head and shoulders above the rest. A bit of a late starter on tour‚ Anthony Watson, however, has delivered some classy performances on the wing.

Though Williams' skill in the air is hard to match‚ Scotland's Stuart Hogg brings the wherewithal‚ skill set and grit the Lions will need when things get tough against the Boks.

Gatland has much on his plate. He will hope to avoid first-course indigestion.