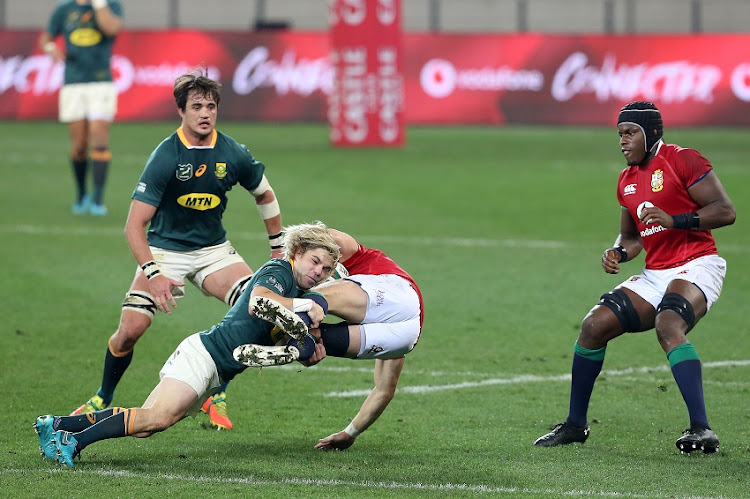 The echoing soundtrack in the cavernous Cape Town stadium after this long-awaited series finally got going last night was one of a thousand hits.

Finally masks and gloves came off as the Springboks and the British & Irish unrelentingly tore into each other.

At the end, it was the Lions who, on the back of a splendid second half performance, stood with their hands raised in triumph.

Inspired by a Trojan-like performance from lock Maro Itoje, who perhaps fittingly won the last turnover to make sure of victory, the Lions will go into the second Test emboldened by what transpired here in the second half.

They deprived the Springboks of possession, mauled and scrummed with greater intent but crucially too, their kicking game had the Boks jumping more in hope than expectation.

Anthony Watson was long of stride and effort on the wing, Ali Price's kicking was pin point, while Tom Curry put in a shift. Itoje's nuisance factor frustrates and ultimately debilitates. He was every bit as influential as he was in New Zealand four years ago.

Much of the Springboks' inquest will revolve around how they faded after setting the early tone.

It was a match that crackled with tension and intensity. Such was the ferocity of the hits the match officials, especially Australian referee Nic Berry, were at times a little flustered.

In the first half the Boks stuck fastidiously to their script that helped them win the Rugby World Cup but if they displayed clarity of thought in their game plan, the Lions couldn't settle on a way forward until the second half.

If the Bok game displayed hallmarks of their experience in Japan in the first half it certainly did not in the second. At the RWC they were able to inexorably suffocate the life out of their opponents but this time they bombed in the second half.

After World Cup heartbreak, Elstadt back in favour for the Boks

It must have been half heart-warming, part soul-destroying to watch his Springbok teammates lift the Webb Ellis Cup after they beat England in the ...
Sport
6 months ago

In the first 40 they knocked the Lions out of their stride, mostly through making some thunderous tackles. Lukhanyo Am's tackle on Elliot Daly set an early benchmark for the near homicidal intent the Boks were prepared to display on defence.

But as the full moon crept into view above the roof of this stadium on the Atlantic seaboard, so the tide turned on the field.

The Lions returned from the break re-energised and backed up their contestable kicks by upping the ante in the physicality stakes.

It was they who suddenly bossed the tight margins and the Boks appeared to have lost their lustre.

The Boks who opted to deploy their more experienced props off the bench, didn't get the same traction in the scrum in the second half as they did in the first.

It wasn't the only area where the Lions got a foothold. The territorial advances they made helped win them penalties and Dan Biggar obliged off the tee.

Steady at the start, Handré Pollard playing in his 50th Test, missed two kicks but so did the Lions.

Faf de Klerk, Kwagga Smith, Siya Kolisi, Willie le Roux and Am were all full of verve and vigour in the first half but the Boks increasingly lost their cohesion in the second half.

This was a game of two halves, but it could become a series of one-way traffic if the Boks don't find another gear.

Revered former Springbok No.8 Pierre Spies believes the team are capable of holding their own against the British & Irish Lions despite players ...
Sport
6 months ago

“It’s just another game‚” television match official Marius Jonker said about the brouhaha over his appointment to Saturday’s opening Test between the ...
Sport
6 months ago

The Lions tours owe their place in rugby folklore to one simple fact.
Sport
6 months ago