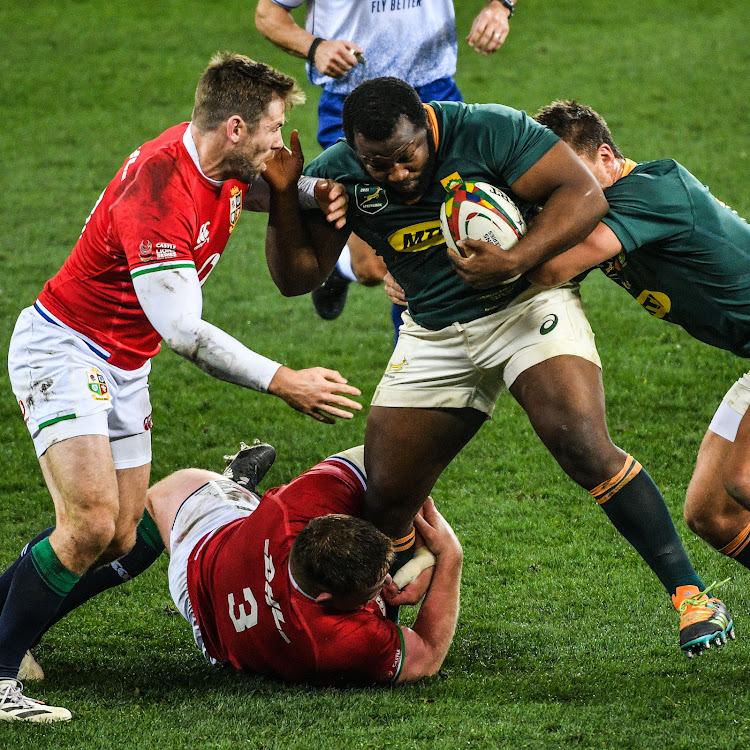 The front row of Ox Nché‚ Bongi Mbonambi and Trevor Nyakane were pivotal in the first half.
Image: @Springboks/Twitter

Just as they were forced to do in 1997 after defeat in the opening Test against the British & Irish Lions in Cape Town‚ the Springboks now have to revert to the drawing board.

Unlike 1997 when Carel du Plessis presided over a disastrous campaign‚ much of the existing scribbles and markings are influenced by Rugby World Cup success two years previously.

Springbok coach Jacques Nienaber‚ in close consultation of course with his boss Rassie Erasmus‚ will have to find solutions to a tide that turned markedly and decisively in the Lions' favour in the second half at Cape Town Stadium on Saturday.

Much had been made of the Springboks' lack of proper preparation in the lead up to the series and the manner in which they fell away in the second half will invite questions about their fitness and ability to stay the course.

In certain areas‚ however‚ their inability to execute was rooted more in the Lions finding exploitable pressure points‚ than fatigue.

The Lions tactical kicking was far superior in the second half and apart from pinning the Springboks in their own half the tourists made valuable gains in aerial combat.

Of perhaps bigger concern was the deterioration that occurred at set-piece after the much-vaunted and celebrated prop pairing of Frans Malherbe and Steven Kitshoff were deployed off the bench.

Earlier Ox Nché‚ Bongi Mbonambi and Trevor Nyakane had left the Boks on a sound footing.

On the evidence of how the match transpired, they should surely get another crack from the start‚ unless it is felt in the next Test that the Boks assemble their eggs in the second half basket.

It would be dangerous, however.

Apart from losing their mojo in the scrum‚ the Springboks were disconcertingly reduced to passengers as the Lions found their grunt in the rolling mauls too.

Whenever the Boks deployed their human caterpillar they were severely disrupted‚ especially by the impeccable Maro Itoje.

The Boks will have to find ways of silencing Itoje, if they are going to find their voice in the series.

The Lions' lock was the menace in chief as he frustrated and ultimately foiled the Boks at every turn in his imperious march to the man of the match award.

He was disruptive at the breakdown too and the Boks may have to consider personnel changes‚ even if it is just to the bench‚ if they are going to effectively troubleshoot that area.

Duane Vermeulen's ability to deal with the hanging‚ approaching ball as well as his skill as a jackal were sorely missed.

In fringe player Marco van Staden the Boks have a specialised and highly-skilled pilferer but, as was the case in 2009 when Heinrich Brussow performed a similar role for the Boks‚ there will be questions regarding his relative lack of bulk.

Van Staden's elevation may cause the kind of disruption the Boks can do without. There is no point changing light bulbs when load-shedding is your destiny.

One way or the other, the back row will have to be a point of discussion.

Kwagga Smith was outstanding in the first half but he also copped a few hits‚ some were of course avoidable‚ that drew the sting from his second half effort.

Pieter-Steph du Toit and captain Siya Kolisi toiled manfully but the Boks' back row efforts now need to be directed more strategically and purposefully if the world champions are going to play themselves back into series contention.

With better quality possession they may also pose more questions of the Lions' defence.

It will‚ however‚ require more decisiveness from the base and in Cobus Reinach they have another fringe player who is like a coiled spring.

But major personnel changes are unlikely. The Boks will try to find solutions from within the existing 23.

Former Bok flank Schalk Burger raised the concern that it was not so much physical match sharpness the Boks may lack going into the first Test‚ but the mental vitality to find on-field solutions.

With one more game under the belt‚ the Boks will almost certainly be better in the second Test.

The match fitness and the cohesion that come with time spent in combat can only benefit them, though the same holds true for the Lions.

The Springboks have built much of their preparation for this series against the British & Irish Lions by looking in the rear view mirror.
Sport
4 months ago

The echoing soundtrack in the cavernous Cape Town stadium after this long-awaited series finally got going last night was one of a thousand hits.
Sport
4 months ago

A tactical switch and a plead for calm at half time proved coaching master strokes as the British & Irish Lions surged to an opening Test win over ...
Sport
4 months ago