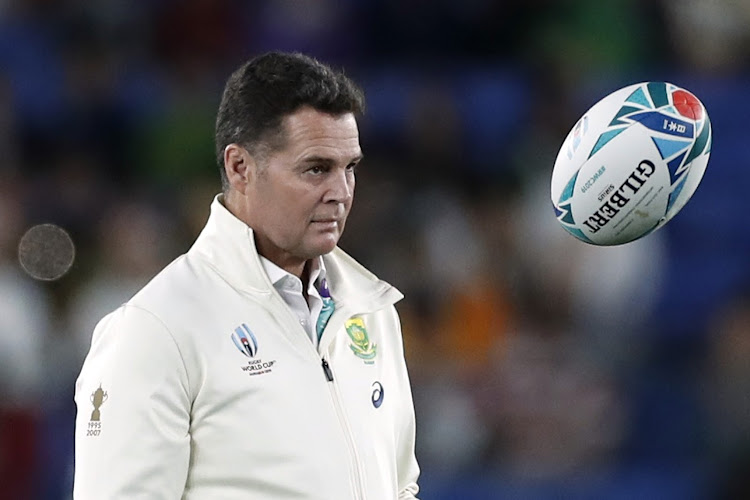 Rassie Erasmus has strongly dismissed suggestions that he is behind a controversial Twitter account ran by a certain Jaco Johan that has grabbed the headlines during the British and Irish Lions Tour.

In what has been described as mind games by some, and ‘reckless and dangerous’ by others, Erasmus posted a clip from the Lions’ 22-17 victory last weekend where Cheslin Kolbe was tackled by Ali Price as he contested a high ball.

In that moment, the Springbok winger is then picked up from the floor by Mako Vunipola and Erasmus said the Lions prop acted in a “reckless and dangerous” manner after lifting Kolbe off the floor.

British & Irish Lions assistant coach Steve Tandy believes if SA’s director of rugby Rassie Erasmus has any complaints about rough play from the ...
Sport
9 months ago

In some of his tweets after the Boks lost to the Lions, Erasmus said ‘no excuses’, ‘deserved’ while referring to the visitors. He also said, “sometimes calls go for you and other times they don’t” as he continued with his social media campaign against the tourists.

On Tuesday the World Cup-winning Erasmus said he is not ‘Jaco Johan’, but he follows him because he has been feeding him some good clips.

“I am actually not Jaco Johan, I am Johan Erasmus, but I follow Jaco Johan because he is a big supporter of us and he has been feeding me some really good clips for a while now,” said Erasmus.

“He has been sending some really good things that I have actually used in the past, he is a very good supporter, a really funny guy and I enjoy the things that he does. Why I am so active on twitter, I actually just retweeted about two or three tweets that I really thought were accurate and then I tweeted twice just for a simple reason.”

Zooming into the incident involving Kolbe, Price and Vunipola, Erasmus said the Springboks winger could have been seriously injured.

“As Director of Rugby, we do have the medical department as part of our programme called Bok Smart and in the one tweet I thought the way Cheslin Kolbe was picked off the ground could have been a serious injury.

Just as they were forced to do in 1997 after defeat in the opening Test against the British & Irish Lions in Cape Town‚ the Springboks now have to ...
Sport
9 months ago

“We teach our primary school children from an early age that you leave a player as he is there because it is dangerous. We wouldn’t like our Springbok players this Saturday to go pick every Lions play up. I thought that was an important one to get out there while I had the opportunity.

“Otherwise, I thought the other tweet was just about the Lions really deserved to win. They came through the same Covid-19 protocols as us, they are far away from home, its only those two tweets and obviously I did retweet a few things from a few guys who I thought they were spot on. A guy like Squidge Rugby, I enjoy him, for an example, and when something makes sense I like to retweet.”