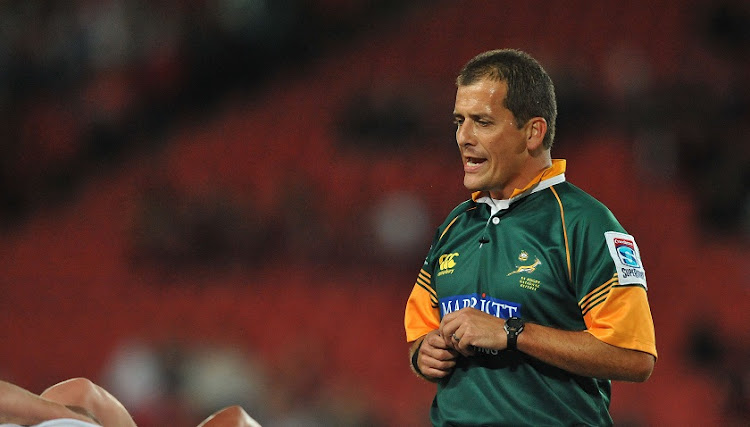 With so much of the fallout from the first Test dominated by talk about the match officials‚ the ghastly hangover will likely linger until the conclusion of the Springboks' series against the British & Irish Lions.

Even before the series kicked off‚ there was controversy as South African television match official (TMO) Marius Jonker was placed in the invidious position of having to preside over the most important Test series in four years after New Zealand's Brendon Pickerill could not make the trip due to travel restrictions.

As no other neutral official could be summoned in time to meet Covid-19 protocols for involvement in the series‚ Jonker was placed between the devil and the deep blue sea. His decisions were either going to be frowned upon by his countrymen or the tourists‚ both‚ for different reasons arguing bias.

Rassie Erasmus says World Rugby's failure to provide a swift response to questions about the rules has negatively affected the Springboks' plans for ...
Sport
4 months ago

It was his countrymen who most felt hard done by and his actions this weekend will come under even greater scrutiny when the teams go at it again in the second Test.

As the tone and volume of the debate has hardly softened over the last few days‚ it remains to be seen if Jonker will stay on as TMO for the remainder of the series.

SA's Stuart Berry‚ TimesLIVE has reliably learnt‚ has been summoned to join the match officials' bio bubble in Constantia in Cape Town's leafy southern suburbs. In what capacity he has joined isn't immediately clear. That an outsider is asked to join a secure bio bubble is peculiar.

Taking the heat off Jonker may be the best thing governing body World Rugby has done for a while‚ but any change will likely draw indignation from somewhere.

Of course Saturday's match may also proceed without meaningful consultation with the TMO‚ but then the onus will be squarely on New Zealand's Ben O'Keefe to get things spot on.

It wasn't just Jonker that was in South Africans' crosshairs last week‚ but Australian referee Nic Berry's handling of the scrums also became a hot topic.

Rassie Erasmus has strongly dismissed suggestions that he is behind a controversial Twitter account ran by a certain Jaco Johan that has grabbed the ...
Sport
4 months ago

As a former top level scrumhalf with the Reds and Racing Metro among others‚ there was the expectation Berry would have a full grasp of 'the picture' that was unfolding in front of him at scrum time.

This week it is hoped Kiwi O'Keefe will connect the dots between what he sees and what he does with his arms when observing the set piece.

O'Keefe has presided in five Tests involving the Springboks‚ with the men in Green and Gold winning three‚ and drawing and losing one each.

That defeat was the deeply dispiriting 38-3 defeat to Ireland in Dublin in November 2017. The Ireland pack was on the front foot in every department on that biting evening and only two of the six Springbok front rankers then will be involved on Saturday. Steven Kitshoff who starts this weekend was on the bench then‚ while Malcolm Marx who was a starter in Dublin is on the bench this weekend.

Whether SA draw level or concede the series on Saturday‚ the match officials will play a part. For rugby's sake let's hope it's a minor one.