Trevor Nyakane on his adventures in the Bok squad: 'It's about SA and the Green and Gold' 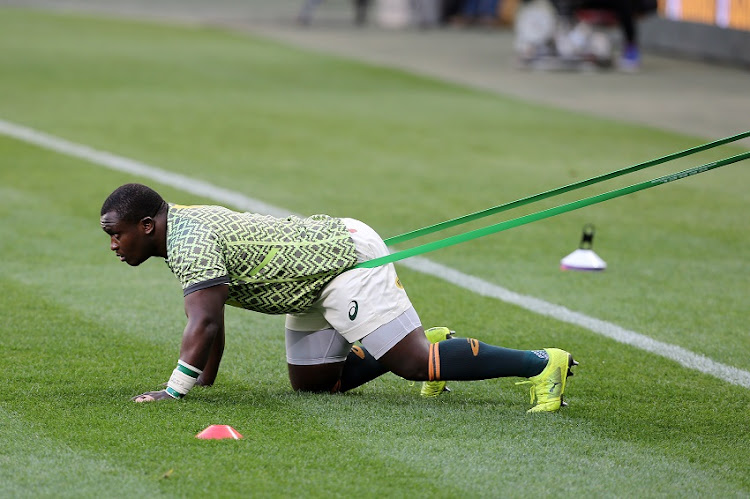 Trevor Nyakane during warmups before the first Test match between South Africa and British and Irish Lions at Cape Town Stadium on July 24, 2021 in Cape Town.
Image: EJ Langner/Gallo Images

Trevor Nyakane is not one to shy away from a challenge or new adventure.

He was a one that became a three but is back to one‚ although his heart lies at three.

Nyakane made the considerable transition from loosehead to tighthead so long ago that he can't recall with certainty when it happened‚ but injury in the Bok camp has necessitated a move back to a jersey he is familiar with.

He started the series against the British & Irish Lions on the tighthead side but injury in that Test to Ox Nché meant redeployment. He had to cover loosehead from the bench in the second Test and is destined for the same role in the deciding Test.

It begs the question whether Nyakane still sees himself as a tighthead‚ or as a player who will continue to make the short but perilous journeys from one side of the scrum to the other. After all‚ his versatility has seen him make just six starts in his 45 Tests.

Springbok coach Jacques Nienaber has made three changes to the starting line-up for the deciding match against the British and Irish Lions at the ...
Sport
5 months ago

“In my younger days I was always a loosehead‚” reminded this weekend's loosehead.

“There came a time at the union where we were short of tightheads. I was asked to start covering that position. At the time‚ if you asked me‚ I would have said I'm a loosehead just helping out at tighthead. But as time went on that started to change.

“If you asked me two weeks ago what position I prefer to play I would easily‚ without doubt have said 'I'm a tighthead'. I can try to cover loosehead but I'm a full-on tighthead.

“At the moment I'm a loosehead because that is what the team needs. It's got nothing to do with Trevor himself. It is about South Africa and the Green and Gold. Even if they put me at lock I would go‚ but I'm not sure I would be a line-out option‚” quipped the 32-year-old.

He makes the point that the coaching staff demands what is within his compass.

But the conversion isn't easy and must initially feel like putting your left foot into your right shoe. If not adequately prepared‚ you could easily put your foot in it.

“From a technical perspective there is a lot of different things that happen‚” Nyakane confirmed.

“A prop isn't just a prop. It was a bit challenging for me to move back. The last time I played loosehead was in 2016‚ I think. It was challenging but I got a lot of help from Ox (Nché) and Kitsie (Steven Kitshoff), guys who have been playing loosehead. Also a tighthead like Frans (Malherbe) will help and say 'do this a bit more‚ because I hate it when a loosehead does that'.

“Then there is also coach Daan (Human), who is amazingly passionate. He knows his thing and I think he also played there a bit (in fact‚ four Tests in 2002) and he gave me a few pointers as well.

“I went into the game confident enough that we had done the prep, because I was put in that situation a few times during training.

The air ahead of the second Test between the Springboks and the British & Irish Lions is thick with acrimony which is likely to be the prevailing ...
Sport
5 months ago

“The credit though‚ as always, goes to the back five. They've been incredible. They've been immense. They bring so much fire power from the back‚ we just need to concentrate on a few things.”

In all the blurry mayhem that has been this series against the Lions‚ the terrifying teddy bear of a prop has had time to wear his now trademark smile and the odd tear of joy. A social media post of his young daughter wearing a kiddies-sized No3 Bok jersey did the rounds.

“It brought tears to my eyes when I saw it. She's my number one supporter.”