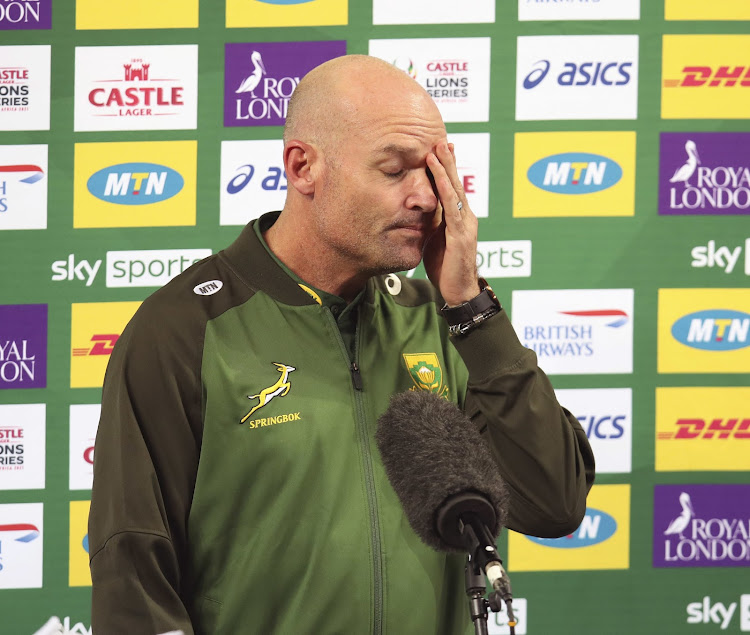 Springboks coach Jacques Nienaber speaks to the media after the match.
Image: ©BackpagePix

At the most significant point in his admittedly short career as Springbok coach‚ Jacques Nienaber looked away.

He could not bear to watch Morne Steyn line up a penalty that would potentially seal a series victory over SA's oldest foe‚ the British & Irish Lions.

“I was sitting with my head between my knees so I didn’t see the kick‚ I just heard it‚” recalled Nienaber about the penalty that predictably sailed through the uprights.

It had an air of inevitability about it.

Twelve years prior the 37-year-old Steyn had inflicted similar late misery on the Lions.

“But I’m just so happy for him to have had that opportunity. It was like a fairytale‚ obviously he did it 12 years ago and now has done it again‚” said Nienaber.

Eben Etzebeth‚ who shared a breakfast table with Steyn on Saturday morning predicted the late heroics.

“I had breakfast with Morne. I told him he could win the series. He said he hoped the Boks would be further ahead.”

Steyn had difficulty comparing the two series winning kicks as so much time had passed since the first.

“It’s a bit long‚ to remember what exactly happened in 2009. But it was almost exactly the same situation.

“We were also tied up and had a final kick to win the game. Like I said‚ that one was 54 metres and this one was around 25m. So‚ yeah‚ it was a bit better for my old legs.

“Just to be part of this whole thing‚ 12 years later‚ is an amazing feeling.

“Then to get that final kick again‚ almost in the same position‚ just a bit closer for the old legs. Luckily it went over. It’s just a great day for SA rugby.”

Cloaked in fog initially, this city revealed its splendour in time for the much-anticipated Mother of all Battles.
Sport
10 months ago

He says if he keeps being selected he'll keep pitching up.

“After six years in France I came back and I thought it was over (Bok career). I will take it year by year.

Steyn's selection‚ which was questioned in the build-up to the match‚ did not warrant further interrogation once the flags were raised in the 79th minute.

He played against the Lions for SA A but was outside the match-day 23 for the first two Tests.

“We are so fortunate to have three unbelievable flyhalves in our squad‚” Nienaber was keen to point out.

“And I must say this week Elton Janjties was phenomenal in helping us with our preparations.

“As Rassie Erasmus just told the team‚ Elton couldn’t have been a better Finn Russell in the week (putting personal ambition aside for the team's cause)‚ and that speaks volumes about the squad system.

“Our philosophy is that you can be disappointed when not selected‚ but then the role of that player must change to contributing in different ways‚ and that’s exactly what Elton did.

“Obviously‚ as I mentioned earlier in the week‚ it was an hour-long discussion about who to go with in selection between the two‚ but we felt experience was key for this type of environment.”

With the series against the British & Irish Lions out of the way the Springboks can turn their gaze to the playing fields of the Rugby Championship ...
Sport
10 months ago

The most unique British & Irish Lions series will conclude on Saturday with the result‚ perhaps fittingly‚ as nail-bitingly in the balance as a ...
Sport
10 months ago

Springbok captain Siya Kolisi reflected on the monumental challenges the team had to overcome to secure their come-from-behind series victory over ...
Sport
10 months ago

The most unique British & Irish Lions series will conclude on Saturday with the result‚ perhaps fittingly‚ as nail-bitingly in the balance as a ...
Sport
10 months ago

The All Blacks rode a second-half blitz to a 33-25 win over Australia but conceded late tries to flatter the Wallabies in a blustery Bledisloe Cup ...
Sport
10 months ago

British & Irish Lions made the tour of our lives

It was always going to be a British & Irish Lions Test series like no other.
Sport
10 months ago