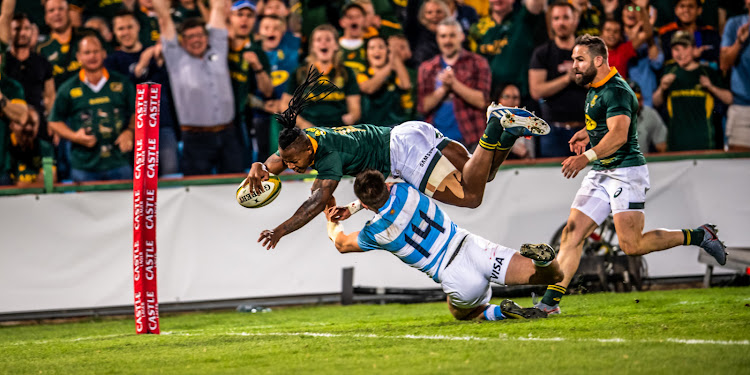 S'bu Nkosi will hoping to crash over the try line again when the Springboks take on the Pumas in in Gqeberha.
Image: @Springboks Fire/Twitter

Having beaten the best the northern hemisphere has to offer, South Africa quickly return to the fray to take on their rivals from south of the equator when the Rugby Championship starts this weekend.

The world champions sat out last year's edition of the southern hemisphere test championship for fear that a lack of playing opportunities during the Covid-19 pandemic would leave their players dangerously under-prepared.

There can be no such fears heading into their opener against Argentina in Gqeberha on Saturday with the Springboks coming straight off a 2-1 triumph over the British and Irish Lions in a series played with ferocious intensity.

As always, New Zealand remain the favourites to win the title, as they have in 17 of the 25 of the previous editions, and they looked in solid form last week when they beat Australia in the first Bledisloe Cup test at Eden Park.

Coach Ian Foster won only 50% of his tests in his first season in charge and anything less than an 18th southern hemisphere title could mark the end of his reign when his contract comes up for renewal at the end of the year.

The second of three Bledisloe Cup tests is also the Rugby Championship opener and Australia must break a 35-year hoodoo against the All Blacks at Eden Park to keep alive their chance of capturing that trophy since their last triumph in 2002.

Dave Rennie's young Wallabies side did enough to win their July test series against a weakened French touring party but are still struggling to consistently display the physicality required at the top level of the game.

Like Australia against France, the All Blacks in their July clashes were frequently bested at the breakdown by Fiji's battalion of European-based players, even if they managed handsome victories in both tests.

Refereeing idiosyncrasies notwithstanding, that could indicate that the game has moved on elsewhere while the Australasians have been playing mostly among themselves during the global health crisis.

If that is the case Argentina, whose best players ply their trade in Europe, might fancy another upset or two.

The pandemic still looks to have a major part to play in where and when their matches take place over the seven rounds as state borders shut down all over Australia in response to new outbreaks of the coronavirus.

The only certainty is that the Pumas will again play all of their matches on the road, as they did last year when they came out of quarantine to register their first win over the All Blacks and draw twice with Australia.

Australasia still leads the way in law innovations and a raft of variations that proved successful in local Super Rugby, including allowing a red carded player to be replaced after 20 minutes, will be trialled during the competition.

Matured Bok flyhalf Jantjies knows it's all about the team

Flyhalf Elton Jantjies has had to watch most of South Africa’s recent success from the sidelines as the second choice to Handre Pollard, but on ...
Sport
5 months ago

Sbu Nkosi says the Boks have made elaborate plans to counter the physical threat of Argentina when they meet in their Rugby Championship match at the ...
Sport
5 months ago

Springbok coach Jacques Nienaber has made wholesale changes to his match day squad for the opening Rugby Championship match against Argentina at the ...
Sport
5 months ago

Springbok flyhalf Elton Jantjies is expecting Argentina to be full of confidence during their opening match of the Rugby Championship at the Nelson ...
Sport
5 months ago