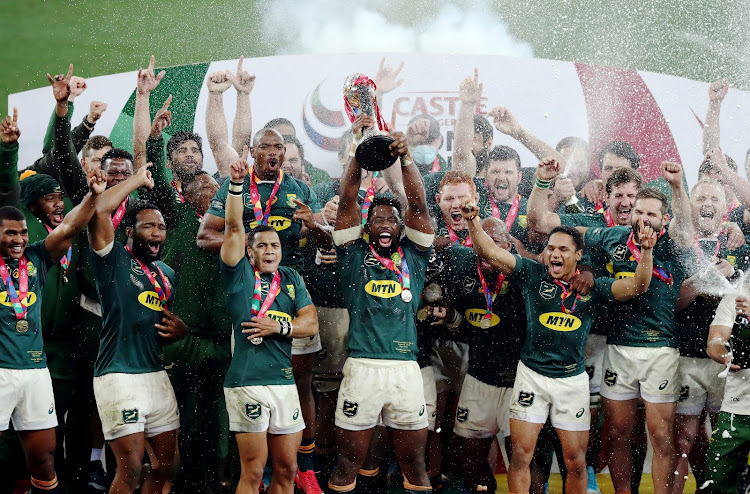 As the recent series against the British & Irish Lions graphically illustrated, the Springboks' drive for success remains unquenched.

Indeed, part of their success has been to remain properly hydrated and to that end they have taken another leap to help optimise on-field performance by striking a partnership with THIRSTI Water for the next three years.

The company, which has only been in existence for six years, also sponsors the Sharks, the Bulls, the Comrades Marathon and the Cape Epic.

“Hydration is very important for a player’s performance. It is one of the basic foundations in making sure a player isn’t compromised and is able to try to achieve maximum output,” stressed Andy Edwards, the Springboks' head of athletic performance.

Edwards explained just a small deviation in hydration levels can have an impact on an athlete's output.

“If players are even just 2% dehydrated, it could lead to a drop in performance. Drinking water can make sure your body is and stays hydrated, as well as helping regulate body temperature.”

Edwards added that hydration strategies before a match will always differ slightly based on the individual and the time of kickoff. Because players have to take fluids every hour, the later the kickoff the more fluid the player is likely to consume before the match.

“During a game it will also differ depending on how much work a player gets through or if a player sweats more than another. But typically a player could drink roughly 500ml each half and will also consume more during half time with it being a perfect time to rest and rehydrate. Post-match a player will drink roughly 1 to 1.5 litres of water for every 1kg of body weight they have lost,” explained Edwards.

THIRSTI water is naturally rich in minerals and has a pH of 8, said the company's quality assurance manager Rosemary Mtshali.

Matured Bok flyhalf Jantjies knows it's all about the team

Flyhalf Elton Jantjies has had to watch most of South Africa’s recent success from the sidelines as the second choice to Handre Pollard, but on ...
Sport
3 months ago

Springbok coach Jacques Nienaber has made wholesale changes to his match day squad for the opening Rugby Championship match against Argentina at the ...
Sport
3 months ago

World champions South Africa will look at resting some players that helped them win the series against the British and Irish Lions to manage ...
Sport
3 months ago