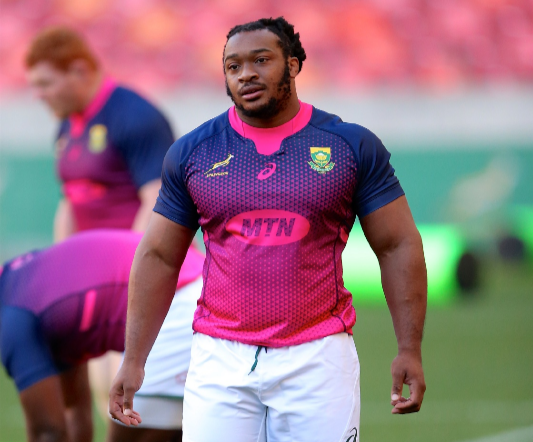 Springbok captain Siya Kolisi is excited to see highly promising hooker Joseph Dweba of Bordeaux making his anticipated debut against Argentina in the opening match of the Rugby Championship in Gqeberha on Saturday.

The 25-year-old Dweba is the only uncapped player in the Bok starting line-up and he will be part of the largely inexperienced front row with Ox Nché, who has three caps, and Wilco Louw, who has 13.

“I thought the week in the build-up to his debut has gone very well,” said Kolisi in his captain’s press conference on Friday afternoon.

“Playing hooker is an important position. We have a lot of senior guys who have played a lot of games but when it comes to scrumming and stuff we look to him, and he has taken that in his stride.

“He has guys like Ox and Wilco who he will be working together with and they will lead us and take charge when it comes to the scrum battle and that is the great thing about this team.

“Whether you have zero caps or 89 or 90 caps, we all have duties as team members and whether you are the captain or whatever we all listen to the person who is in charge.”

Kolisi, who remembered his Springbok debut against Scotland at Mbombela Stadium in 2013, said SA have tried to make Dweba’s build-up as smooth as possible.

“We have tried to make his build-up special and I think he has enjoyed it. What is now left for him is to step on the field and do his thing.

“I know he is excited, I know he can’t wait to get on to the field and it has been special week for him building up to the match, because this is what he has worked for his entire career.

Springbok flyhalf Elton Jantjies is expecting Argentina to be full of confidence during their opening match of the Rugby Championship at the Nelson ...
Sport
10 months ago

“It has been a journey-and-a-half. He had to go overseas for him to get an opportunity and now he has the opportunity.”

Springbok assistant coach Mzwandile Stick said he was happy to see players like Damian Willemse, Sbu Nkosi and Aphelele Fassi getting starting opportunities because they have been knocking on the door.

“We are looking forward to seeing those guys on the field. They have really worked very hard and they were key behind the scenes to the success that we had against the British & Irish Lions,” Stick said.

“I am talking about training sessions where they really pushed hard, and they are excited to get an opportunity. A guy like Sbu has been around with us and we know what he can do and he’s got a bit of the X-factor.

“Aphelele is a youngster who has been performing well for the Sharks and he also did well when we played against Georgia. He had some good touches, so we are just looking forward to seeing them because they have been knocking very hard on the door.

“A guy like Damian has been playing off the bench as one of the 'bomb squad' members. For him to be in the starting line-up shows that he is starting to mature in his game and doing basics very well.”

LIAM DEL CARME | Boks may be ‘boring’ but they’re winning

Springboks coach Jacques Nienaber made12 changes to the match day squad to manage workloads of players and create depth in the squad, and not to ...
Sport
10 months ago

Sbu Nkosi says the Boks have made elaborate plans to counter the physical threat of Argentina when they meet in their Rugby Championship match at the ...
Sport
10 months ago