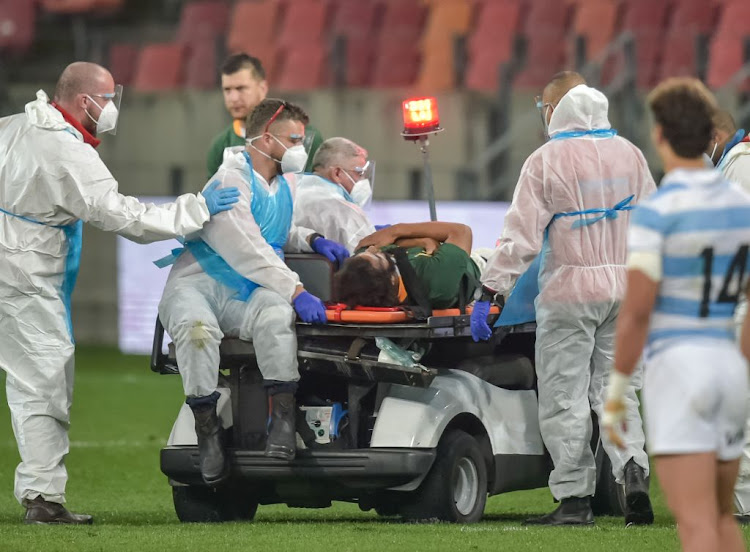 An injured Jaden Hendrikse being carted off during the Rugby Championship match between the Springboks and Argentina at Nelson Mandela Bay Stadium on August 21, 2021 in Gqeberha.
Image: Christiaan Kotze/Gallo Images

The injury Jaden Hendrikse suffered against Argentina on Saturday appears serious and he may be on the sidelines for some time to come.

Springbok coach Jacques Nienaber was anything but upbeat in his brief prognosis of the injury that forced the rookie scrumhalf off the field in the 72nd minute of the Boks' 29-10 win.

“I think he is going to be in trouble,” said Nienaber.

Hendrikse, who was playing in only his second Test, again came on as substitute for Cobus Reinach, but was injured in a borderline late tackle.

He departed the scene on a medical cart, leaving the Boks a man down until the final whistle finally sounded 14 minutes later.

“He went for scans. Hopefully it is not bad,” said Nienaber about the injury. “Jaden is a tough character, but he couldn’t put weight on his leg. I think it might be more than just a ligament. It might be bone.”

Although Hendrikse now looks unlikely to play in the remainder of the competition, the Boks should have Faf de Klerk and Herschel Jantjies back from injury when they run out next.

“Two positions that we were very thin in was at loose forward and at scrumhalf,” said Nienaber. “I remarked that our loosies are worth more than gold. We had eight loose forwards in the group and four were injured within a week of each other.

“However, the good news is that three of the four will be ready in a few weeks and while it wasn’t ideal to play Siya (Kolisi) again, we didn’t have a choice.”

No 8 Duane Vermeulen, who missed the Lions series because of an ankle injury, is back in training and should also be ready for the next clash.

“He made it difficult for us in training as he is keen to take contact and play again. Jean-Luc du Preez is also almost over his ligament injury and 'Perd' (Rynhardt Elstadt) is almost ready to go again. So it looks as if we will have enough loose forwards in the mix again.”

When that “mix” returns in the form of game time is up in the air.

The tournament schedule is in imbroglio after New Zealand and Australia tightened lockdown restrictions. SA Rugby offered to host the remainder of the tournament but their Antipodean partners are more partial to completing the playing roster in Europe where fans are allowed to attend.

They will argue that Sanzaar stands to generate greater profits, while taking the tournament to Europe would also deny the Springboks the advantage of playing on home soil for the rest of the tournament.

What may also linger in Sanzaar officials' minds is SA Rugby's decision not to send the under prepared Boks into battle in the same tournament last year.

The Boks will have 42 players in their group wherever they play the remainder of the Rugby Championship. Covid protocols will make it extremely difficult for them to augment their squad with replacements.

The team will remain in Nelson Mandela Bay until a decision is taken on the rescheduling of the competition’s remaining fixtures and Nienaber said they were ready for any eventuality.

“We would like to play the Rugby Championship in SA; we’ve proved we can do it,” he said. “But we’ll play anywhere we have to. We’ve got six scenarios ready and when the decision is made, we’ll put it into action.”

Bok coach Nienaber after win against Argentina: 'I’m unbelievably proud of the squad of players'

The portents appeared gloomy after the Springboks' defeat in the opening Test of the series against the British & Irish Lions last month but four ...
Sport
1 month ago

As ever, where the rest of the Rugby Championship will be played will likely be determined by the size of the windfall Sanzaar are likely to generate.
Sport
1 month ago

Rugby Australia (RA) CEO Andy Marinos is "optimistic" the Wallabies' Bledisloe Cup meeting with New Zealand will go ahead in Perth despite the All ...
Sport
1 month ago

SA have not let the uncertainty over the future of this year’s Rugby Championship sparked by New Zealand’s stricter Covid-19 regulations affect them ...
Sport
1 month ago