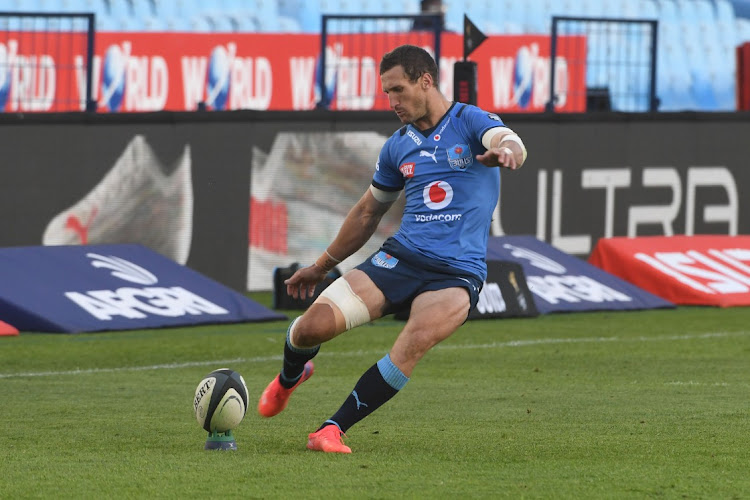 Johan Goosen, here playing against the Cheetahs, delivered a commanding performance for the Blue Bulls in their Currie Cup semi-final against Western Province on Friday night.
Image: Lee Warren

Thoroughly in character the Bulls called on a momentum-based stampede to subdue Western Province in their Currie Cup semifinal at Loftus Versfeld on Friday night.

The heavily-touted Bulls, who came into the fixture having finished a mammoth 14 points clear of fourth-placed WP, quickly underlined the difference in class.

The Bulls took a firm grip upfront bossing the breakdowns, the scrums, while the visitors had no answer to the home side's redoubtable line-out.

With so much front-foot possession it meant the hosts could deploy their heavy hitters which resulted in Western Province having their defences breached with alarming regularity in the first half.

Behind the marauding pack flyhalf Johan Goosen was imperious and he filled his boots off the kicking tee.

But it was the Bulls' interplay that had WP chasing ghosts. Goosen's touches were sublime while fellow halfback Zak Burger neatly pulled the strings.

Harold Vorster straightened the line when that was the most judicious option, while Cornal Hendricks revelled in the spirit of the ball being given air.

Elrigh Louw was constantly industrious and Arno Botha too.

Western Province, though full of fight after falling well behind, were poor at the basics. Their kick receipts left a lot to be desired while their discipline let them down in the ruck. They were heavily penalised in that department in the first half.

Given the disparity in the log position the visitors duly started the match like a team that had ground to make up. Silly early penalties put them on the back foot with Goosen handing the Bulls the lead through a penalty before hoofing another penalty to the corner soon after.

It was from the ensuing line-out that Goosen floated a perfect pass to Hendricks.

Another ruck penalty handed the Bulls relief from the restart and the hosts mesmerised with some skilful passing before Goosen was the player on hand to round off.

As a contest the match was in danger of losing its lustre but the visitors calmed the nerves when left wing Edwill van der Merwe rounded off acrobatically when a simple run in was required.

He was a constant threat, as was Sergeal Petersen but ultimately it was the visitors' shortfalls up front that has left them wondering.

World Rugby and SA Rugby on Friday announced that the hugely popular Cape Town leg of the HSBC World Rugby Sevens Series, which was scheduled for ...
Sport
2 months ago

Stick not stung by criticism