Sharks will travel with full tank to Loftus 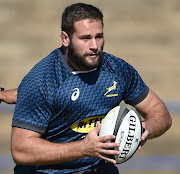 Image: Johan Pretorius/Gallo Images Prop Thomas du Toit, who was part of the Bok squad, will represent the Sharks in Saturday's Currie Cup final at Loftus.

The Sharks will hope the inclusion of Thomas du Toit will be the tiger in the tank they need to tip the scales in their favour when they clash with the Blue Bulls in Saturday's Currie Cup final at Loftus Versfeld.

Du Toit, who was part of the Springbok touring group has returned on account of “family bereavement” but was included in the Sharks' starting team for the final.

He will pack down at tighthead while on the other side of the scrum Khwezi Mona has been named ahead of Ntuthuko Mchunu.

Sheer size up front will count for something and the inclusion of tighthead Du Toit will help address that. The Sharks would have taken note of the manner in which the Blue Bulls at times manhandled Western Province in last Friday's semifinal at Loftus. They will not want to suffer the same fate.

In replacement scrumhalf Lucky Dlepu the Sharks have a potential debutant going into the crunch fixture. The 21-year-old featured at age group level for Western Province, captaining their Craven Week side in 2017, before making the move to Durban last year.

The Sharks will take some momentum into the final having beaten the Bulls, the Cheetahs, the Lions and Griquas over the last month or so but they have also suffered defeat to Western Province in that period.

Although his team lost after extra time to the Blue Bulls in last season's final, coach Sean Everitt is taking heart from their recent success against the team in blue.

“It’s one-all in the Currie Cup, we’ve beaten them once and there’s no reason we can’t do it again,” said Everitt.

“We know the Bulls have a massive pack of forwards, they are playing well and were sublime in their semifinal. It’s all about momentum. We know what’s coming our way with regards to how they play and the emphasis for us will be about stopping their momentum and stopping their big ball-carriers.”

Apart from fronting up in the tight exchanges, Everitt is mindful that their kicking game has to be on point if they are going to reverse the result of last year's final.

“We know that the ball travels far at Loftus so we’re going to have to handle the aerial battle well, but we have three players — Curwin (Bosch), Sanele (Nohamba) and Lionel (Cronje) — who kick really well and will be up for the challenge.”