Wallabies face Cooper conundrum as they plot to avoid ‘Bok-lash’ 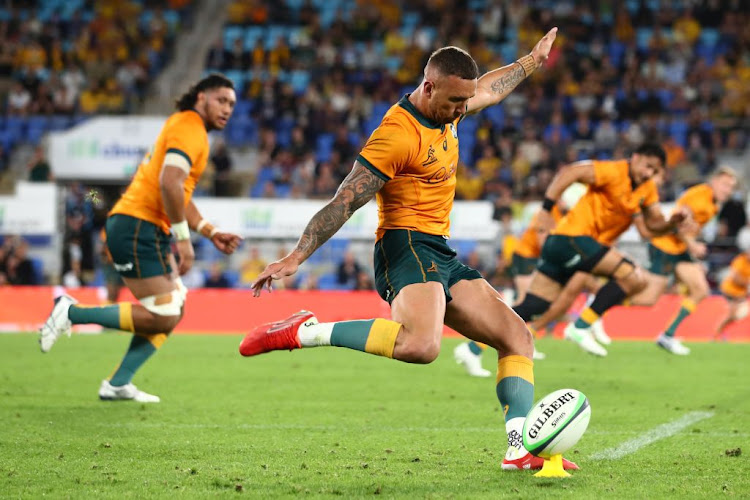 Quade Cooper of the Wallabies kicks the winning penalty goal during the Rugby Championship match against the Springboks at Cbus Super Stadium on September 12 2021 in Gold Coast, Australia
Image: Chris Hyde/Getty Images

Quade Cooper’s match-winning return to Test rugby has given the Wallabies staff a headache as they plot to avoid a backlash from world champions SA in the Rugby Championship on Saturday.

Flyhalf Cooper slotted eight out of eight kicks, including the winning penalty after the siren, in a perfect night off the tee as Australia’s campaign clicked into gear with a 28-26 win over the Springboks on the Gold Coast.

Dave Rennie’s shock recall of Cooper for his first Test in four years proved a masterstroke as the New Zealand-born playmaker steered the Wallabies with composure through the heat of the Springboks’ rush defence.

“Based on form it was hard to leave him out. I thought he was massive tonight,” Rennie said after the win.

“He was able to implement under pressure against the world champions.”

With young flyhalf Noah Lolesio having struggled throughout the All Blacks’ whitewash and James O’Connor lacking match fitness, Rennie may find it hard not to retain Cooper in the number 10 jersey for the re-match in Brisbane.

Latching onto the 33-year-old Cooper as a long-term prospect in the number 10 jersey may be a riskier play, however.

Many pundits have urged Rennie to keep faith in the still-raw Lolesio, who was dropped for Sunday’s game, despite question marks over his decision-making under pressure.

Asked whether Cooper might have a chance to wear a gold jersey at the 2023 World Cup in France, Rennie was unequivocal.

“He would be a young fellow if he was in a Springbok team,” Rennie quipped.

“Of course he could. We’re not thinking too far ahead at this stage and neither is he.

“I know he’s keen and available for the rest of the year and we’ll make a call beyond that.”

Sunday’s win was Australia’s fourth from 13 Tests since Rennie took over the side last year, though there have been three draws among the six defeats.

Knowing they can beat the world champions will do wonders for the confidence of Rennie’s rebuilding team, though they can expect a chastened SA to improve in Brisbane.

“I think we’ve got a lot more in us,” said Rennie.

“What we know next week is it’s going to be another level.”