Says players should not be judged on one game 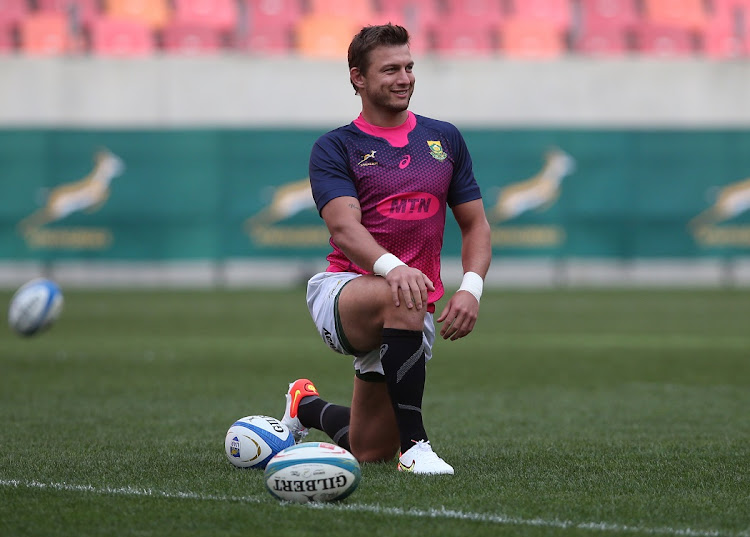 Handre Pollard during a Springbok training session at Nelson Mandela Bay Stadium in Gqeberha last month. He took flak in the wake of the team's defeat against the Wallabies last Saturday.
Image: Richard Huggard/Gallo Images

Their goal kicking may have been off the mark against the Wallabies but Springbok assistant coach Deon Davids has backed Handre Pollard and Damian Willemse to make the necessary improvements before Saturday's return Rugby Championship Test in Brisbane.

Davids reminded of the qualities the players possess and the long-term view the Boks cannot lose sight of in building for the next Rugby World Cup.

The Boks went down 28-26 in the Gold Coast following a last-gasp match winning penalty from Australia flyhalf Quade Cooper.

The Boks had earlier squandered opportunities at goal, which could have advanced their score by 10 points.

“Handre Pollard is a professional rugby player and a quality individual on and off the field,” reminded Davids.

“He is the first guy to put up his hand and said he wasn't as strong with his kicking game. We know what he can do. We know he takes pride in the way he does things.”

Revision and corrections will be done

Davids said Pollard was experienced enough to know how to make corrections.

“He will work hard to improve in that specific area,” said Davids.

Willemse, who missed a relatively easy conversion that would have given the Boks a three point advantage with only a few minutes to play, has also come in for stick.

Davids, however, was keen to point out that the player should not be solely judged on a kick.

“Damian is a talented and versatile player. We need to look further than just this game. He also saved a try.

“Although we want to win the Rugby Championship and do well on the end of year tour, our long-term vision is to win the next RWC. To do that you have to build experience in certain areas.

"The experience players like Herschel (Jantjies) and (Aphelele) Fassi are getting in this tournament will be important lessons they can take forward if required at the RWC.

“Damian did miss that kick but he has other good qualities. We have to look holistically at what he brings for South African rugby going forward,” said Davids.

Some pundits have already advanced the view that Morne Steyn's accuracy off the kicking tee should be a major consideration in the assembly of the match day's 23 for this weekend's clash.

Davids could not speculate about the make up of the team due to be named on Wednesday.

“We will look at who is in the squad and what the challenges are and will make a decision accordingly,” he said.

Boks will come to grips with issues in the scrum

Apart from place kicking, Davids said, the Boks are also looking to sharpen their discipline, defence and tactical kicking ahead of Saturday's Test at Suncorp Stadium.

Their scrum has also invited scrutiny after they conceded crucial penalties in that department.

“Set pieces are an important part of our game,” Davids said about an area that also falls under his remit as forwards coach.

“Scrums are difficult to officiate. It is important for us is to make sure there is alignment between the pictures we see as coaches and what the referees see. Going forward it means we understand what we need to interpret and the areas we need to work on. The calls can go either way. It is very competitive. I feel for referees and the players.

“We have had clear discussions in terms if their interpretations. Going forward we will have a better understanding of what we need to do to get rewards.”

Davids acknowledged the team did not deliver their best performance last weekend.

“This was maybe not our best performance individually or as a team. All credit to the Wallabies who are a well coached side. Things worked out for them. We had opportunities and result might have been different.

“The players searched for solution,  but having experience that I'm convinced players will handle things differently and maybe we will get the result,” said Davids.

Winning has been the Springboks' most effective riposte to accusations of playing a boring brand of rugby, but that defence was taken away on Sunday ...
Sport
4 months ago

Springboks wary of Wallabies threat, but can prevail

The widely predicted path of today's Rugby Championship clash in Gold Coast is said to be the well-worn one of Wallaby attackers frenziedly heading ...
Sport
4 months ago

Flyhalf Quade Cooper celebrated his first test in four years by slotting a penalty after the siren that gave the Wallabies a tense 28-26 win over ...
Sport
4 months ago