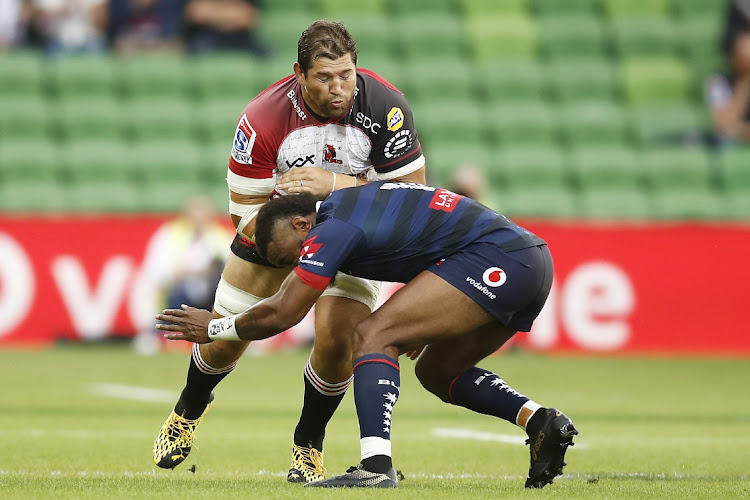 Willem Alberts of the Lions is tackled by Marika Koroibete of the Rebels during the round six Super Rugby match in Melbourne in 2020. Alberts remains injured and will miss the Lions' first trip to Europe in the URC. (Photo by Daniel Pockett/Getty Images)
Image: GETTY

Willem Alberts remains sidelined and will miss the Lions’ inaugural trip to Europe for their opening four fixtures in the United Rugby Championship (URC).

Alberts is still rehabilitating from a hamstring injury, Cronjé from ankle surgery, while Lombard has been out with a long-term ankle injury.

All three, however, form part of the Lions’ wider group for the URC.

The Lions are also expected to start their campaign without another Bok loose forward Jaco Kriel who is also on the injured list. He is, however, expected to regain fitness during the four-week tour.

The Lions open their campaign against Italian side Zebre on Heritage Day.

Head coach Ivan van Rooyen was upbeat his players can quickly familiarise themselves with the unfamiliar conditions they will encounter in Europe.

“We’re pretty excited about the group. As a coaching unit we have been fortunate enough to have time to discuss and plan how we want to approach the URC. This was coupled with a few on-field sessions before settling on a final 33.

“We expect conditions to be challenging up north but at the same time looking forward to competing and establishing ourselves as the competition progresses,” said Van Rooyen.

SA rugby will usher in a new era with the departure this week of the Bulls, Sharks, Stormers and Lions to Europe for the start of the inaugural ...
Sport
1 week ago

The biggest winning margin ever in a Currie Cup final capped a near perfect season for the Blue Bulls.
Sport
1 week ago

The blue dynasty Jake White helped create here have no apparent pretenders to the throne.
Sport
1 week ago