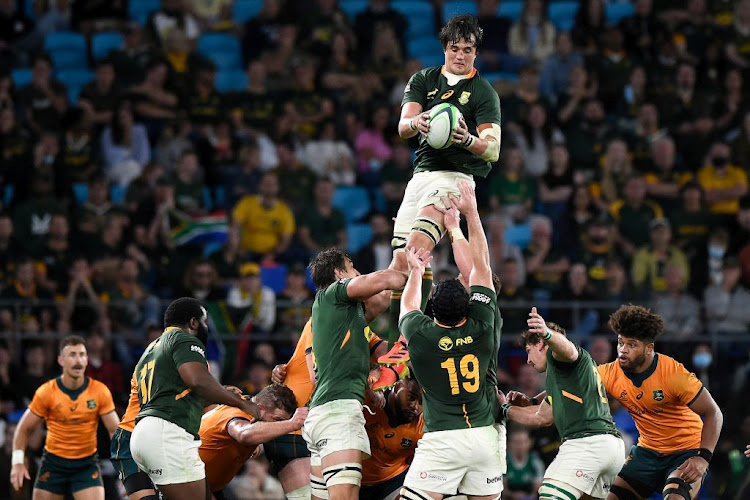 The Springboks' options at lock have shrunk with the news that Nicolaas Janse van Rensburg will miss the rest of the Rugby Championship.

He has withdrawn from the squad for personal reasons.

His departure means Franco Mostert, who did duty on the flank in last weekend's defeat at the hands of the Wallabies, may come under greater second-row consideration for the remainder of the tournament.

Janse van Rensburg, who made his Springbok debut against Argentina in Nelson Mandela Bay, was one of five specialist locks in the Springbok touring squad, along with Lood de Jager, Eben Etzebeth, Marvin Orie and Mostert.

Utility forwards Rynhardt Elstadt and Jean-Luc du Preez can cover lock and loose forward, which gives Springbok coach Jacques Nienaber enough options in the second row as they prepare to take on Australia in Brisbane on Saturday, and New Zealand in back-to-back Tests thereafter.

“It is always sad to lose a player, and especially such a good team man, but Nicolaas has personal matters to attend to, and as a Springbok family we support him,” said Nienaber.

“With the strict Covid-19 protocols to enter Australia, which includes a mandatory two-week quarantine, he will not be returning. But we are fortunate to have depth in our touring squad as we prepare for a challenging string of matches against Australia and New Zealand in the next three weeks.”

Mostert, who also played on the side of the scrum during the Rugby World Cup, said on Tuesday the transition from the second row to the flank had not been difficult. “The journey has been incredible. We will play in any number just to be in group.

“For me to take over from Pieter-Steph du Toit, who is a brilliant player, was a huge honour. I will try to fill boots. Hopefully, I can make him proud. I want to make everyone proud.”

The Boks are coming to grips with last weekend's defeat and have had their debrief.

“The entire squad was disappointed about the result, but it’s important that we put it behind us and ensure that we don’t make the same mistakes again,” said Nienaber. “We have three big matches coming up, and if we win them all we can still defend our Rugby Championship title, so we’ll continue to work hard on the field to achieve that.”

Assistant coach Deon Davids who fronted the media in an online press conference on Tuesday said they will have a better idea tomorrow which of the players who are carrying injury niggles will be ready for the weekend. Cheslin Kolbe who missed last week's Test with a leg injury may come under consideration this week.

“We will have clarity on those niggles when we hit the training field tomorrow,” said Davids.

Winning has been the Springboks' most effective riposte to accusations of playing a boring brand of rugby, but that defence was taken away on Sunday ...
Sport
9 months ago

Flyhalf Quade Cooper celebrated his first test in four years by slotting a penalty after the siren that gave the Wallabies a tense 28-26 win over ...
Sport
9 months ago