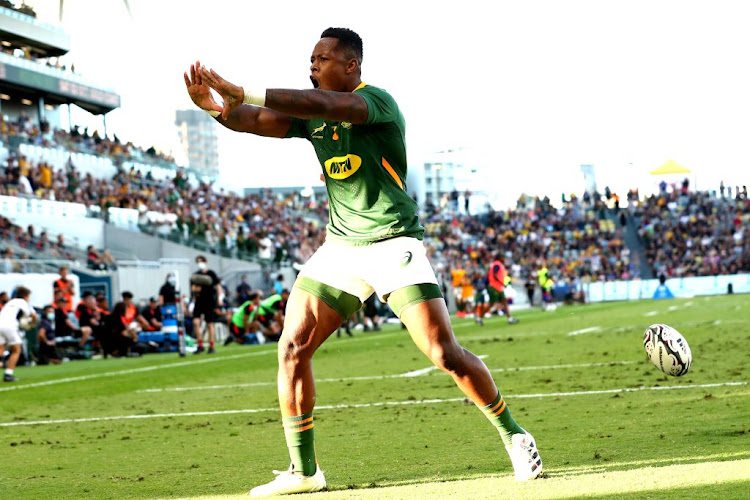 Sbu Nkosi celebrates after scoring a try during the Rugby Championship match between the Springboks and New Zealand at QCB Stadium on September 25, 2021 in Townsville, Australia.
Image: Chris Hyde/Getty Images

The Springboks showed marked improvement in the 19-17 Rugby Championship defeat to New Zealand in the landmark 100th meeting between the two sides on Saturday, but the South Africans were outdone by a late penalty by Jordie Barrett.

Here is how Springboks players rated in Queensland [the ratings are in brackets].

One of the senior players in the team, Le Roux had an underwhelming day in the office and he is the one who didn’t release the ball that gave the All Blacks kicker the opportunity to win the match.

Had a day of mixed emotions as he scored SA’s only try of the match to give the Boks belief, but he was punished with 10 minutes in the sin bin for a deliberate knock-down.

Always a live wire in the midfield with carries, tackles and creating opportunities for wide players, but this was not his best game in the Springbok colours as he did not get enough opportunities.

De Allende is one of the key players for the Boks and he produced good work defensively, even though there were a few missed tackles. But he didn’t get enough opportunities going forward.

Mapimpi was not at his very best when it came to dealing with aerial balls and he gave away penalties at rucks. He defended well though but there were not many attacking opportunities for him.

The vastly experienced Pollard was one of the weak links in the ranks and was guilty of kicking the ball even when the Boks had momentum, and in good attacking positions. He also missed what was an easy conversion which could have been the difference.

He did a lot of kicking in the match. Some of the kicks were good and put the All Blacks under pressure, while others were poor decision-making under pressure. At times he was found wanting at the base of the ruck.

The influence of the veteran N0.8 grew as the match went on and bar a few mistakes here and there, he had a good game. Coach Jacques Nienaber will be happy that he is beginning to regain his best form after many months out with injury.

Given a rare start, Smith went about his business effectively as he tackled, carried the ball, troubled the All Blacks with his speed and was busy at the breakdowns.

The man gave a captain's performance which impressively included some great tackles, carries and good leadership on the park as the Springboks took correct decisions when it came to the execution of set pieces.

The towering De Jager was one of the outstanding performers for the Boks as he took charge of the SA line-outs. He also stole the ball a few times from poorly taken throw-ins by the All Blacks.

One of the senior players who will be looking to improve in the next match at the weekend as he was at fault for New Zealand’s try after missing a tackle on Codie Taylor.

He recovered from an early knock on the head to show an impressive performance in the scrums. He carried the ball very well to earn crucial territory, and was like a mosquito to Joe Moody.

He threw well from the line-outs and carried the ball well, tackled whenever it was necessary but was replaced at halftime without having stamped his authority on the match.

It was a significant occasion for him as it was his 50th Test match for the Springboks.  Nyakane had a solid shift as he was good in the scrums and was solid in the defence against the dangerous All Blacks attack.

He made his presence felt when he came on after the halftime break by producing a number of good carries, strong tackles and finding his jumpers in the line-outs.

Kitsy also produced a storming performance in the defence. He was instrumental in the scrums and his general contribution was good.

He made an immediate impact shortly after coming on by winning a scrum penalty.

The South African could have wrapped up the match in the closing stages after his line-out steal, but was responsible for the spill that helped the All Blacks kick for touch and win the match.

He impressed after coming on in the 63rd minute with some powerful carries in the final quarter where he got the better of a few defenders.

Not enough time on the field to be rated.

Not enough time to be rated.

The Springboks took some positive strides but it still left them coming up short 19-17 against their great adversaries in their Rugby Championship ...
Sport
7 months ago

Australia rode an early two-try burst to a comfortable 27-8 victory over Argentina in the Rugby Championship in Townsville on Saturday, winning three ...
Sport
7 months ago

South Africa captain Siya Kolisi says his side have no special plans to counter the threat of New Zealand and that executing their own game-plan ...
Sport
7 months ago