Pollard gets a kick out of Bok tactics 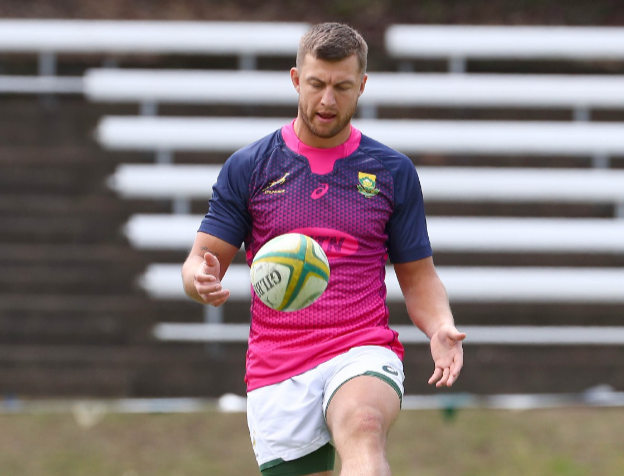 Springbok flyhalf Handre Pollard says the team draws comfort from their strategies and each other.
Image: Image: Tertius Pickard/Gallo Images

It is often noted how spectacularly sporting fortunes can fluctuate within the space of a week.

Springbok coach Jacques Nienaber, in the build-up to his team's landmark Test against the All Blacks last week, spoke about how his team needed to reach within to find answers after their twin defeats to the Wallabies.

“We asked what our soul is and what we do as South Africans,” said Nienaber, who had earlier noted that his team had deviated too far from their trusted methods in their 30-17 defeat to the resurgent Australians.

It wasn't so much a return to the drawing board as the well, as the Boks rediscovered their competitive edge and ran the All Blacks closer than many had anticipated in their 19-17 defeat in Townsville.

While drawing from those qualities and tactical blueprint helped get the Boks into a position of promise, it curiously also helped grease the wheels of their demise in the closing minutes.

The Boks' reliance on their kicking game has been all too apparent since Rassie Erasmus and Nienaber started steering the team in 2018 but it is the aerial obsession in the closing minutes of last week's game that has amplified derision and dissent among fans.

It is apparently what this generation of Springbok is most comfortable doing.

Boks have specific soul and DNA

“We've got a specific soul and DNA in this team,” vice captain and flyhalf Handré Pollard reminded from Surfer's Paradise. Having deviated from the script against the Wallabies, the Boks are now again in possession of what makes them tick.

“We trust our plan. Of course, it is different (applying the boot in positions of promise) and the boys stuck to it really well,” he said.

Going to the air, lest we forget, has helped elevate the Boks in the world order in the last few years. It is when it doesn't work and they lose that it becomes thoroughly unedifying.

“That's an area where we really feel we're the best in the world, the aerial contests. It's something we really work hard at. It's unorthodox, but we do it,” explained Pollard.

Nienaber stated when he named his team for Saturday's return clash against the All Blacks in Gold Coast, that the Boks would continue to engage in aerial combat.

They would continue with the blueprint that helped make them World Champions and the No 1 ranked team in the world until last week.

Pollard explained that the players draw comfort from familiarity of those around them, and the well-worn battle plan.

Undeterred by what has gone before

“Of course, losing a couple in a row would make you think that you'd lose a bit of confidence. But, particularly among our team leaders, we really have so much belief in our process and we get confidence from our preparation and from each other.”

He went on to explain that how they go about their business on the field will not be determined by what went down the week before.

“We don't really look back at results, even if you won the previous week. We give confidence to each other, the way we interact and train.

“When Saturday comes, it's really just about executing as best as you can. There will be a few decisions you ideally would want back, but that's rugby. But we still train the same and with the same intensity and quality.”

Bok coach Jacques Nienaber has hyped this weekend's clash against the All Blacks in Gold Coast as his team's biggest of the year. What is perhaps ...
Sport
7 months ago

The Springboks showed marked improvement in the 19-17 Rugby Championship defeat to New Zealand in the landmark 100th meeting between the two sides on ...
Sport
7 months ago

The Springboks took some positive strides but it still left them coming up short 19-17 against their great adversaries in their Rugby Championship ...
Sport
7 months ago