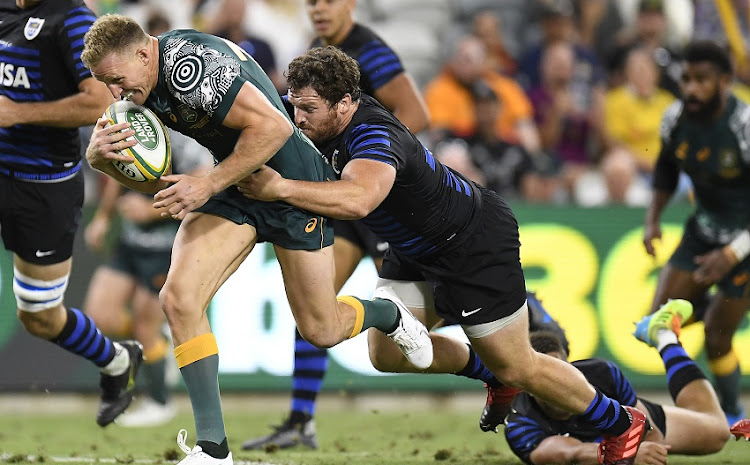 Reece Hodge of the Wallabies runs in to score a try during The Rugby Championship match between the Australian Wallabies and Argentina Pumas at QCB Stadium on September 25, 2021 in Townsville, Australia.
Image: Ian Hitchcock/Getty Images

Argentina endured a difficult finish to a challenging Rugby Championship on Saturday with defeat at the hands of Australia, but coach Mario Ledesma praised the character shown by his team at the end of an arduous tour.

The Pumas went into the game on the Gold Coast without six players who were sidelined for breaching pandemic protocols on an unsanctioned day trip to Byron Bay.

With injuries and fatigue taking their toll on a weary Argentina side that has not played a home test in two years, a makeshift team went on to lose 32-17 to the Wallabies.

"They finished their seasons in Europe, went to play the July internationals. Two weeks later, three weeks later we were playing South Africa after 10 days of holidays.

"It's not the best way to prepare. They need a little rest."

There will be no let-up on the horizon for Ledesma's team, however, with tests lined up in Europe against France, Italy and Ireland in November.

Despite their difficulties, the Pumas finished the competition on something of a high as a pair of tries from Thomas Gallo gave the scoreboard a respectable sheen against a Wallabies side that held a 32-3 lead after less than an hour.

"I thought we had 10 minutes in the second half when they scored easy tries, like really easy tries," said Ledesma.

"And then there was a show of character too, after two months of a lot of effort and sacrifice, especially after a difficult week the boys showed character.

"Maybe the game was done but you still have to do it."

Ledesma said it was impossible to assess how much the loss of the sextet, which included Santiago Medrano and Pablo Matera, had on his team as they sought their first win in this season's Rugby Championship.

"It's really difficult to calculate that," he said.

"How do you? It's just intangible. There's nothing concrete. There's no data to know how much that weighed on the game or not.

"But I thought the guys who came from the bench, who were guys who didn't play the whole tournament, they were pretty good."

New Zealand coach Ian Foster said he has more immediate concerns than the next Rugby World Cup but believes his All Blacks have learned lessons from ...
Sport
10 months ago

In-form winger Andrew Kellaway grabbed a hat-trick of tries as Australia rounded out their Rugby Championship campaign with a comfortable 32-17 win ...
Sport
10 months ago

After his side's 31-29 win over New Zealand on Saturday, Springbok coach Jacques Nienaber gave credit to the replacements who were introduced during ...
Sport
10 months ago

In the last Rugby World Cup (RWC) it was their Bomb Squad that rose to prominence, and though not as forward heavy this time, again the bench pressed ...
Sport
10 months ago

Bulls coach Jake White says younger players in his United Rugby Championship (URC) must use the opportunity of playing in the tournament in Europe to ...
Sport
10 months ago