Boks leave it late for nerve-jangling win against Wales 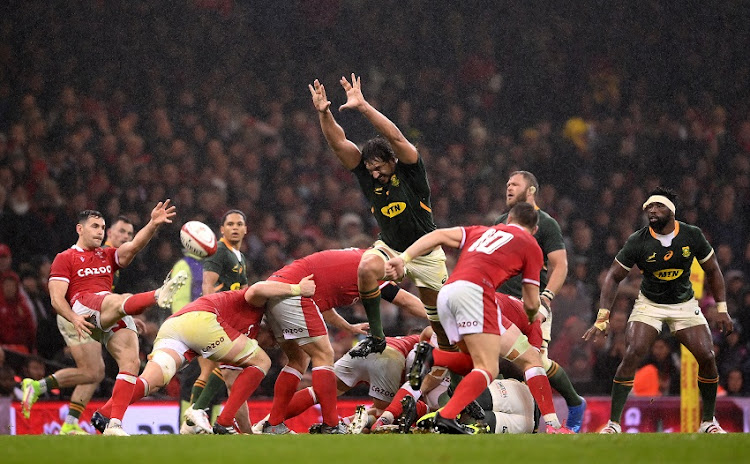 Eben Etzebeth of South Africa attempts to block the kick of Tomos Williams of Wales during the Autumn Nations Series match between Wales and South Africa at Principality Stadium in Cardiff, Wales, on November 6 2021.
Image: Laurence Griffiths/Getty Images

Tests between the Springboks and Wales may be ponderously predictable, but they remain thoroughly tense, nerve-jangling affairs.

SA's 23-18 victory at Cardiff's Principality Stadium on Saturday night was no different, and it took the Springboks 72 minutes to produce their world champion qualities when they got themselves decisively in front through a maul try by Malcolm Marx.

Elton Jantjies added a penalty in the last act of the game to confirm the Boks' first win in Cardiff since 2013.

The Boks scrum made a statement of intent the first time the two packs collided. The Welsh pack twisted as it back-pedalled left.

Oddly though, given the wet conditions, there was only one scrum in the opening half. The Boks profited richly from that facet in the second half.

Bongi Mbonambi stood strong there, as he did in defence. Lood de Jager was the talisman in the line-outs, while Eben Etzebeth was immense throughout.

Ox Nché, despite often catching the attention of the referee, had a busy evening. Captain Siya Kolisi also made some telling contributions before he made way for Jasper Wiese in the 70th minute.

The Boks lost Damian Willemse inside the first 20 minutes when he left the field for a head injury assessment. The knock was severe enough to prevent his return, which paved the way for Frans Steyn.

He made a huge impact, as did scrumhalf Cobus Reinach, although his box kicks, much like that of Herschel Jantjies, failed to hit the spot.

Jesse Kriel, however, played like a man short of game-time and out of position,

This was an error strewn match, albeit in atrocious conditions, and the Boks only got a firm footing in the closing stages.

Before that, fortunes fluctuated as the teams traded penalties.

The Boks often found themselves on the wrong side of the law in the first half, and matters reached near boiling point when they conceded a succession of penalties which led to a yellow card for Nché.

Apart from conceding too many penalties, the Springboks didn't capitalise on the opportunities they had in the Welsh 22. Although the Boks line-out was solid with Lood de Jager standing tallest, Wales succeeded in repelling the tourists' driving maul in the first half. Wales took liberties in that regard as they often interfered with the support players in an attacking Boks line-out.

The Boks' tactical kicking could have been sharper.

Wales almost got over the try line on a few occasions, but fell short for different reasons.

Louis Rees Zammit came close in the ninth minute, but desperate Springbok defence in the nick of time shepherded him into touch.

Wales saw a potential try scoring opportunity go begging when a pitch invader and his pursuers put Liam Williams off his stride, giving the Boks cover defence time to recover.