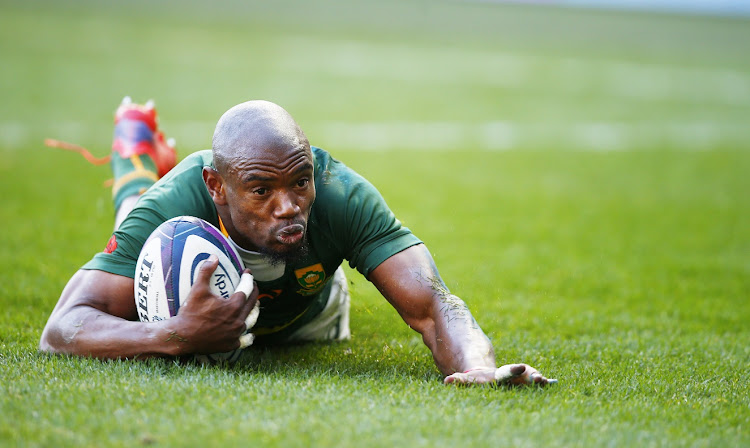 The Springboks' Makazole Mapimpi goes over for a try in the outgoing tour Test against Scotland at Murrayfield in Edinburgh on November 13 2021.
Image: Steve Haag/Gallo Images/Getty Images

Makazole Mapimpi scored a brace of tries as the Springboks beat Scotland 30-15 in their Test match at Murrayfield in Edinburgh on Saturday afternoon.

This was the second win for the Boks on this outgoing tour after they overcame Wales 23-18 last weekend in Cardiff, a result that will definitely serve as a further confidence boost for next weekend’s crunch clash against England at Twickenham.

The win also ensures that Scotland will have to wait for another year to get the better of the Springboks at Murrayfield as they last defeated the South Africans at this venue in 2010.

It was also a good day at the office for flyhalf Elton Jantjies, who started ahead of Handrè Pollard, as he ended his shift with 11 points, which included three penalties and one conversion.

It was a day of contrasting fortunes for the Jantjies as scrumhalf Herschel Jantjies had a nightmare game and it came as no surprise when he was replaced by Cobus Reinach at the beginning of the second half.

There was also the notable personal achievement by Frans Steyn, who became the longest-playing Springbok of all-time with more than 15 years of service, surpassing Victor Matfield.

The Springboks dominated possession, territory and scrums in the opening exchanges as they forced Scotland into errors but did not punish them by taking the points.

The Boks were made to rue not notching up points from the kicking tee when Finn Russell opened the scoring with a penalty, which he put away much to the delight of the Murrayfield crowd.

Just after the half-hour mark Scotland registered their first try through skipper and fullback Stuart Hogg, who completed a move that was started by Duhan van der Merwe.

Three minutes into the second half the Boks retook the lead with a second try of the match for Mapimpi, who benefited from an offload from De Allende after SA won back a contestable ball.

The Springboks continued with their second-half ascendancy with Elton Jantjies scoring his second penalty of the afternoon after 50 minutes to give his team an eight-point lead.

Shortly before he was replaced by Pollard, Jantjies added three more points to the scoreboard and his effort was followed by a second try of the afternoon for the homeside by Stuart Hogg.

Pollard put away his second penalty after 70 minutes to give the Springboks a significant nine-point lead as they looked to close the match and put score pressure on Scotland.

Steyn made his first major contribution to the game when he stepped up to find the middle of the poles with one of his trademark long-range penalties as SA stretched their advantage to 12 points.

It is also worth noting the efforts of Eben Etzebeth who was rewarded with the man-of-the-match award for his storming performance.

Playful pivots won't cause Boks to drift from script

The Springboks will on Saturday perhaps have more reason to focus on themselves and their world champion qualities when they clash with Scotland at ...
Sport
2 months ago

Springbok coach Jacques Nienaber is bracing himself for another arm wrestle when his team meet Scotland at Murrayfield on Saturday.
Sport
2 months ago

Frans Steyn, man of the match in the Springboks' 23-18 win over Wales in Cardiff took a philosophical view of his performance on Saturday.
Sport
2 months ago

Springbok captain Siya Kolisi has stopped well short of hanging the success or failure of their international season on what transpires on their ...
Sport
2 months ago