Mapimpi strikes at a rate of knots 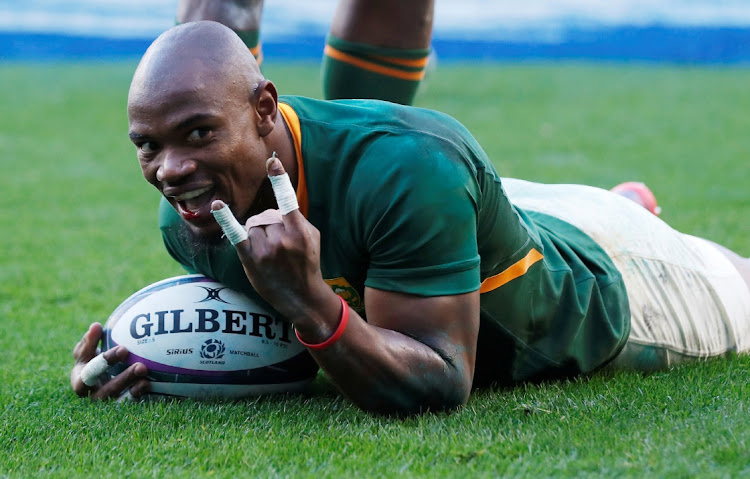 The Springbok pack's pummeling of Scotland and their ability to transition from defence to attack helped pave the way to their 30-15 win over Scotland at Murrayfield on Saturday.

While the bruising performance of their forwards, particularly in the scrum, has been much lauded, their well established ability to transition also yielded dividends.

They were less convincing with their attacks in the red zone inside the opposition's 22 but it was from long range that the Boks made inroads into the Scotland defence.

Chief tormentor in that regard was again left-wing Makazole Mapimpi who dotted down twice. He scored in almost familiar fashion to take his try tally to 19 to help separate the Springboks from their hosts.

He has now scored against nine different nations, as well as the British & Irish Lions and boasts a remarkable .79 strike rate in his 24 Tests.

Danie Gerber's strike rate is similar to Mapimpi's but he played six matches against a composite side from South America and four against the New Zealand Cavaliers which weren't fully sanctioned events during the dark days of apartheid.

Mapimpi has become the Boks most used outlet for tries from turnovers, particularly ones that have their origins in their own half.

“It’s a good feeling to have the ball in my hand and when I’m handed opportunities to finish something off,” said Mapimpi who sees it all in a day's work.

“But it’s my job, too. There’s a real desire from us to strike as much as possible. We do a lot of analysis on teams and, in some instances, it’s about attacking from a turnover.”

He was pleased to see the pressure the Boks build in areas of less obvious promise again yield telling results.

“We scored two tries and there were times when we applied so much pressure they kicked the ball, and we won it back.

“That’s what Jacques (Nienaber, Bok coach) has been driving, to see the opportunities and use them, and we did that today.”

His second try on Saturday was built on the toil of Damian de Allende who accelerated through a gap before offloading deftly.

“That was actually something that I didn’t expect. My eyes were just on Damian himself, so I had to switch them quite quickly. It was awesome,” recalled Mapimpi.

After two wins over Wales and Scotland, the Springboks shift their attention to their last match of their outgoing European tour against rivals ...
Sport
2 weeks ago

England will remember the Bok scrum

The sight of the Springbok pack decimating the England scrum is deeply engraved in the memory of those who witnessed the last Rugby World Cup final.
Sport
2 weeks ago