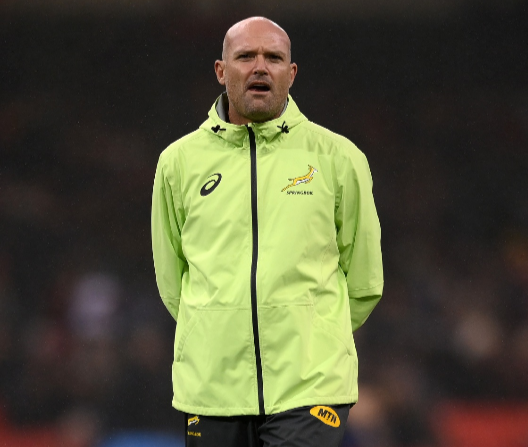 Jacques Nienaber is expecting a tough battle with England at Twickenham on Saturday.
Image: Laurence Griffiths

Springbok coach Jacques Nienaber is expecting a highly competitive and physical encounter with England in their anticipated outgoing tour match at Twickenham on Saturday.

The Springboks are looking for a victory that will see them retain the number one spot on the world rankings and also mark their first unbeaten outgoing tour since 2013.

Nienaber’s men will also wrap up a successful season where they managed nine victories in 13 Test matches.

“I think they are going to try to do the same. Eddie Jones is a brilliant coach and I have coached against him a couple of times — and obviously he knows SA very well.

“He was involved with the Boks in 2007 and he will have a good understanding of how we operate, so it is going to be a big challenge for both of us.”

England will be without Owen Farrell and Jamie George, who suffered respective ankle and knee injuries during the 32-15 win over Australia, and Nienaber says the Boks must be ready for whoever is going to replace them.

“I don’t know who they are going to select but if you look across the board at all international teams now, injuries are going up for most of us and it is a big loss for them.

“It would also have been a big loss for us if we lost a centre and a hooker, but we all have been in the same position. I mean, we are without Frans Malherbe, RG Snyman, Pieter-Steph du Toit, Faf de Klerk, Cheslin Kolbe.

“I think everybody across the board playing at international level has some injuries.”

In the absence of Farrell and Jamie George, England have young forwards like Bevan Rodd and Jamie Blamire who may be thrown into the starting line-up or off the bench.

“I think Jamie is a good player. I am obviously following quite closely a couple of guys who are playing Premiership. He is a young player coming into the mix and he is a good at the breakdown.

“We will have to be on song in handling him. The good thing about England is that they have nice talent coming into the system with players like him and Bevan Rodd.”

Nienaber is expecting a bruising forwards battle from England, who have been impressive in the scrums.

“I know a lot of people are talking about the South African scrum and the bomb squad. But the analysis that I have done in England over the past month shows they have had 21 scrums to attack from and got 14 penalties.

“I think there are a lot of similarities between us, it is going to be a huge challenge for our forwards and the scrum but we must keep out feet on the ground.”