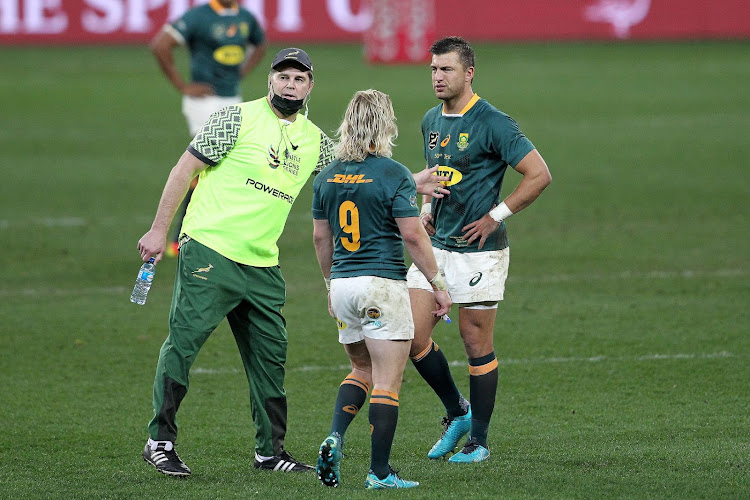 Rassie Erasmus has been banned by World Rugby for his behaviour towards match officials during the British and Irish Lions series.
Image: EJ LANGNER/GALLO IMAGES

SA Rugby and its director of rugby Rassie Erasmus have confirmed that they will appeal against the decisions handed out by World Rugby’s judicial committee against them on Wednesday.

World Rugby banned Erasmus for two months from all rugby activities with immediate effect and the body also hit SA Rugby with a fine of £20,000.

The controversial Erasmus was found guilty on all six charges against him after he put together a 62-minute video that hit out at Australian referee Nic Berry and TMO Marius Jonker's officiating during the Springboks' first Test loss to the British and Irish Lions in July.

SA Rugby and Erasmus said they will be appealing against the decision.

“SA Rugby and Rassie Erasmus have noted the decision of World Rugby’s judicial committee. Both parties confirmed they will exercise their rights to appeal the verdicts. Neither party will make any further comment until the process is complete,” the two parties said.

On Wednesday an independent misconduct committee found that the behaviour displayed by Erasmus towards match officials during this year’s Test series between SA and the British and Irish Lions constituted misconduct.

The committee was chaired by Christopher Quinlan QC, together with Nigel Hampton QC and Judge Mike Mika (both from New Zealand).

Six charges were brought by World Rugby against Erasmus for various breaches of World Rugby regulation 18, and World Rugby’s code of conduct.

The charges in summary were that Erasmus:

Having considered all the evidence, including oral evidence from the match officials,  Erasmus, SA Rugby, World Rugby, and submissions from the parties, the committee found against Erasmus.

Having considered submissions on behalf of both parties in respect of sanction, the independent committee decided on the following:

2) Suspension from all match-day activities (including coaching, contact with match officials, and media engagement) with immediate effect until September 30 2022

3) A warning as to his future conduct and an apology to the relevant match officials.

The parties have seven days to appeal from receipt of the full written decision.

Rassie back in the coaches' box for Boks' three UK Tests

Rassie Erasmus, SA Rugby's much talked about director of rugby, will not be carrying water bottles on to the field in the Springboks' three Tests in ...
Sport
6 months ago

Springboks coach Jacques Nienaber on Tuesday successfully sidestepped the controversial snubbing of SA players by World Rugby in the Player of the ...
Sport
6 months ago

The few contentious calls in the Springboks' 28-26 defeat to the Wallabies last weekend were duly raised with World Rugby's officialdom.
Sport
8 months ago