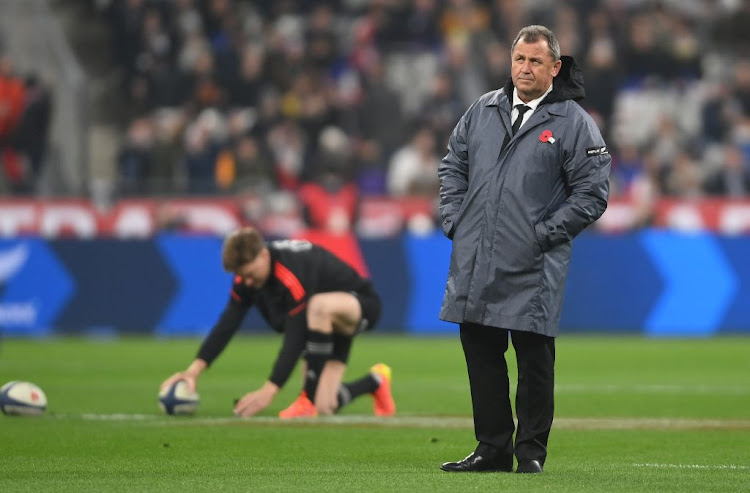 All Blacks coach Ian Foster ahead of his side's clash against France in Paris on November 20 2021.
Image: Mike Hewitt/Getty Images

Finishing the season with 12 wins out of 15 tests would probably not trigger a crisis for most major rugby nations, but All Blacks coach Ian Foster will head home from Europe to a storm of calls for his sacking.

Back-to-back losses to Ireland and France to conclude their end of season tour, on top of the 31-29 defeat at the hands of world champions SA in October, have brought many All Blacks fans to the end of their tether.

A poll of more than 18,000 fans by the New Zealand Herald found backing for the coach to keep his job at only 4.5%, while callers to talk back radio shows have lambasted both Foster and the New Zealand Rugby board that extended his contract in July.

They may have continued the habit of outscoring their opponents in the second half but the Springboks were left to rue their lack of decisiveness at ...
Sport
1 week ago

After the 40-25 loss to France on Saturday night, Foster insisted the All Blacks were making progress, while conceding his side had perhaps run out of juice at the end of a long campaign.

A first loss to France in Paris since 1973, the highest number of defeats in a single season since 2009, and second place in the world rankings are not statistics that sit well with fans just two years out from the 2023 World Cup.

"The All Blacks wanted to end the year as the number one ranked side in the world, but they traipsed off Stade de France unsure if they can honestly say they are even in the top five," rugby writer Gregor Paul wrote in the Herald.

SA Rugby and its director of rugby Rassie Erasmus have confirmed that they will appeal against the decisions handed out by World Rugby’s judicial ...
Sport
1 week ago

Self-pity is not a quality indulged in All Blacks culture, and experienced hooker Dane Coles was clear the players needed to do some hard thinking over the summer break.

"We've got to look ourselves in the eye and have those tough conversations we can't shy away from," Coles told Stuff Media.

"These last two games haven't been good enough. We need to take everything out of it, dissect it and we need to be better going forward."

The two-month ban from all rugby activities plus a year-long ban from the dugout imposed on Rassie Erasmus sparked a massive outcry which rendered ...
Sport
1 week ago

Rassie’s DNA embedded in the Springboks

Rassie Erasmus may be banned over the next nine Tests but every play will have his fingerprints all over it.
Sport
1 week ago

The Springboks hoping to go undefeated for the first time on an end of year tour since 2013, came up short against an old and redoubtable adversary.
Sport
1 week ago