Cute! Siya Kolisi humbled by young fan dressing as him for his 3rd birthday 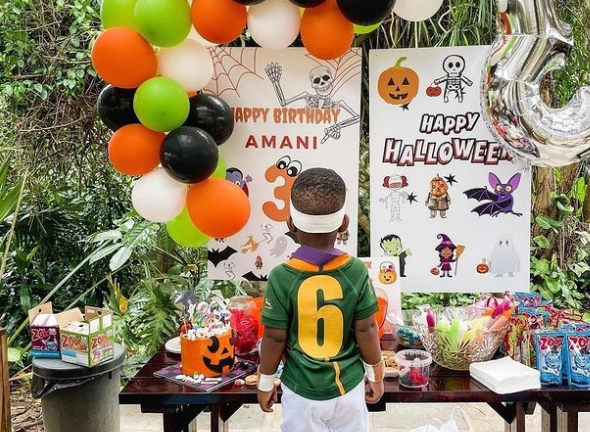 This young fan dressed up as Siya Kolisi for his third birthday.
Image: Instagram/ Joseph_Mpyana

Siya Kolisi was deep in his feels this week when a young fan dressed up like the Springbok captain for his third birthday.

The young fan recently celebrated the big day by wearing a replica of his hero's jersey from the 2019 Rugby World Cup, head bandage and all!

He even got to lift a small Webb Ellis trophy and wear a winner's medal.

His dad took to Instagram to reveal that the young boy later had a bicycle accident and had to be rushed to the doctor to get fixed up, but was brave throughout because he was wearing Kolisi's jersey.

Siya shared snaps of the young fan in his gear, saying it “means more” than he could say.

“This is everything! What a beautiful legacy you have brother on the next generation of children.”

A video of Springbok captain Siya Kolisi putting his autograph on a fan's backside has gone viral.
Sport
2 months ago

Springbok captain Siya Kolisi has shown gratitude to Scottish actor Gerard Butler for coming to the SA match over the weekend.
Sport
2 months ago

Springbok captain Siya Kolisi has stopped well short of hanging the success or failure of their international season on what transpires on their ...
Sport
2 months ago