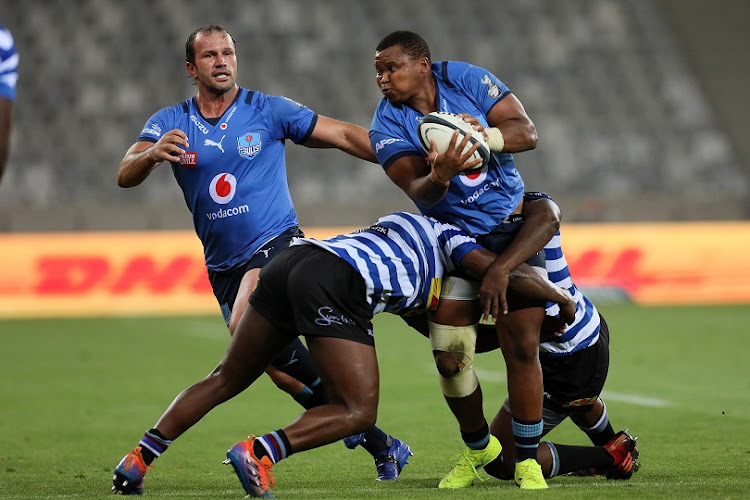 Simphiwe Matanzima of the Bulls carries the ball during the Currie Cup match against Western Province at Cape Town Stadium on January 19 2022.
Image: EJ Langner/Gallo Images

The Bulls maintained their position at the top of the Currie Cup standings with a domineering 40-21 win over Western Province at Cape Town Stadium on Wednesday night.

The defending champions scored six tries, five of which were converted, to register this important bonus-point victory and their second win in succession.

The Bulls went to the break with a commanding 28-0 lead through tries by  James Verity-Amm, Canan Moodie, Simphiwe Matanzima and Cyle Brink, which were converted by Morné Steyn.

They returned from the break in a mean mood with two more tries from the efforts of veteran Bismarck du Plessis and Marco Jansen van Vuuren.

It was also a productive day for vastly experienced flyhalf Steyn as he returned with 10 points from five of the six conversions he kicked.

The home team finally registered their name on the scoreboard after 65 minutes through a touchdown by captain Nama Xaba and that was followed by two late tries from Tristan Leyds and Marcel Theunissen.

The Bulls were reduced to 14 men in the closing stages when Jan-Hendrik Wessels was given his marching orders for contact with the head of a Western Province player.

In the first match of the day, the Pumas produced a ruthless performance to thrash the Lions 50-9 at Ellis Park and move to third spot.

De Beer was also on point with the boot as he put away six of the seven conversions and one penalty to add to his try as they punished a weakened Lions.

In the second match the Sharks, who had a bye on the opening weekend, started their campaign with a narrow 24-23 win over stubborn Griquas at Kings Park.

The Durbanites managed to hold on to an important victory despite completing the match with a man down after Samoan flank OJ Noa was shown a red card for a dangerous tackle.

The Sharks’ two tries were scored by Cameron Wright and Dan Jooste while the Griquas crossed the white line through the efforts of Michael Amiras and Sango Xamlashe.

The Bulls and Western Province will renew their intense and storied rivalry during their traditional north-south Currie Cup showdown at the Cape Town ...
Sport
4 months ago

Former Lions and Springbok scrumhalf Ross Cronje has announced his retirement from rugby.
Sport
4 months ago

The Bulls will start the defence of their Currie Cup crown with a tricky trip to the highly unpredictable Pumas at Mbombela Stadium in what will be ...
Sport
4 months ago