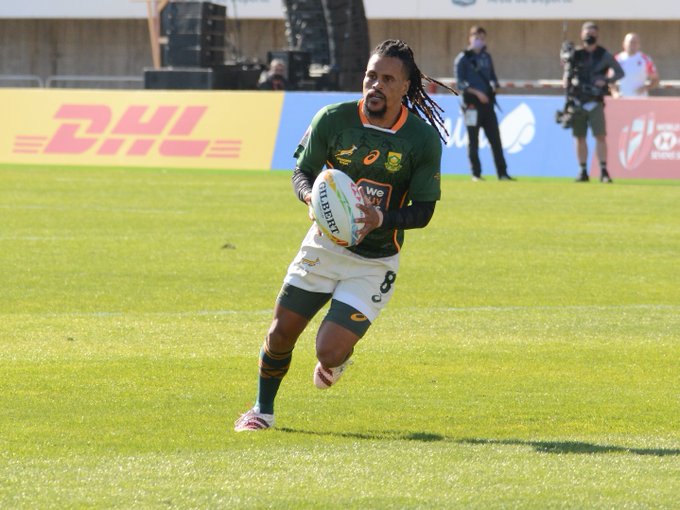 Selvyn Davids scored on the buzzer for the Blitzboks to win at Malaga Sevens.
Image: SA Rugby

In the process, the Blitzboks continued their dominance of the HSBC World Series with a fifth straight tournament win and they have extended their winning run to an incredible 29 matches.

The victory was also some sweet revenge for the Blitzbokke, who were stunned by the less fancied Argentines in the quarterfinals at the Tokyo Olympic Games last year.

There was no Fiji or New Zealand at the tournament, but that should not detract from the performance of the side under coach, Neil Powell, as they continue to beat all-comers.

Springbok Sevens speedster Angelo Davids has joined Western Province and the Stormers on a two-year contract.
Sport
4 months ago

“We have come a long way as a team and it all starts back in Stellenbosch (at their training base). We knew it would be tough, we gave it our all and stuck to the gameplan,” Davids said.

Argentina hit the front when Rodrigo Isgro skipped past two challenges and crossed for an excellent score.

Isgro thought he was in for another but the play was called back for a forward pass and SA won a reprieve.

But the Blitzbokke took the lead with the final play of the first half as they steadily worked their way up the pitch before Davids took a quick penalty to score under the posts.

The lead was extended within a minute of the restart as Impi Visser floated a superb long pass to JC Pretorius in acres of space on the wing and he coasted in to score in the corner.

Springbok stars Siya Kolisi, Lukhanyo Am, Damian de Allende, Eben Etzebeth, and Makazole Mapimpi will be up against each other for the coveted SA ...
Sport
5 months ago

The move was started by a brilliant steal from Zain Davids.

But Argentina struck back as Joaquin de la Vega crossed the try line to level the scores and then stunned the South Africans with another immediately from the kickoff.

Justin Geduld missed the ball and the Argentine streaked away to score.

Geduld made up for that error with a score of his own in the corner a minute from the end, before Davids sealed the win with a trademark break and incredible pace that kept the chase Argentine defence at bay.

The Lions' United Rugby Championship homecoming ended in defeat at the hands of the rampant Sharks at Ellis Park on Saturday.
Sport
3 months ago

In a quite remarkable match that marked their return to the United Rugby Championship, the Stormers upstaged the Bulls 30-26 at Loftus on Saturday.
Sport
3 months ago

The Lions will re-emerge from their festive season hibernation with lock Pieter Jansen van Vuren back from injury and in the match 23 for their ...
Sport
4 months ago