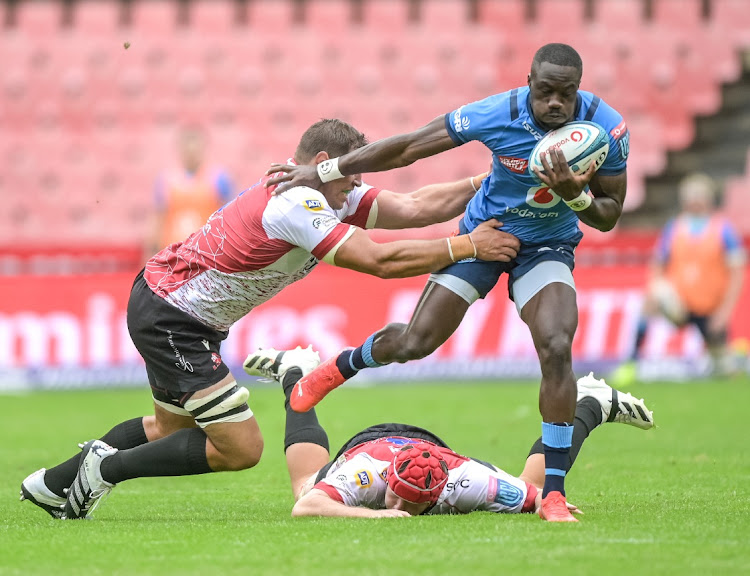 Willem Alberts of the Lions, Madosh Tambwe of the Vodacom Bulls and Francke Horn of the Lions during the United Rugby Championship at Ellis Park on Saturday.
Image: ©Christiaan Kotze/BackpagePix

Bulls coach Jake White has made only one change to the starting line-up for their back-to-back United Rugby Championship (URC) clash against the Lions at Loftus on Saturday.

The Bulls go into this match on the back of a morale-boosting 34-10 win over the Lions where they outscored their rivals by four tries to one at Ellis Park last weekend.

The Lions’ only try was scored by Jaco Kriel and coach Ian van Rooyen will be looking for a significant improvement to return to winning ways.

In the only rotational change for the Bulls, scrumhalf Zak Burger makes a return to the starting team to replace Papier who will be asked to make an impact from the bench.

Cornal Hendricks, who was on Currie Cup duty on Wednesday in the loss to the Cheetahs, has also been added to the replacements as backline cover and he will be the only new face among those on the bench at Ellis Park last weekend.

“The result from last weekend when we beat the Lions at Ellis Park will mean nothing,” White said.

“It’s now a new week and they will come to Loftus Versfeld a hungry side and will want to make amends for the defeat last Saturday. We expect nothing less than another challenging encounter against the side from Johannesburg.

“They showed how strong they can be in the set pieces last week, while also coming at us with some clever, running rugby. We can definitely expect more of the same this weekend.”

The fallout from the Lions' United Rugby Championship (URC) defeat to the Bulls last weekend has been severe.
Sport
6 months ago

When the Stormers announced Brok Harris would be joining their ranks, many eyebrows would have arched at the prospect of a journeyman, soon-to-be ...
Sport
6 months ago