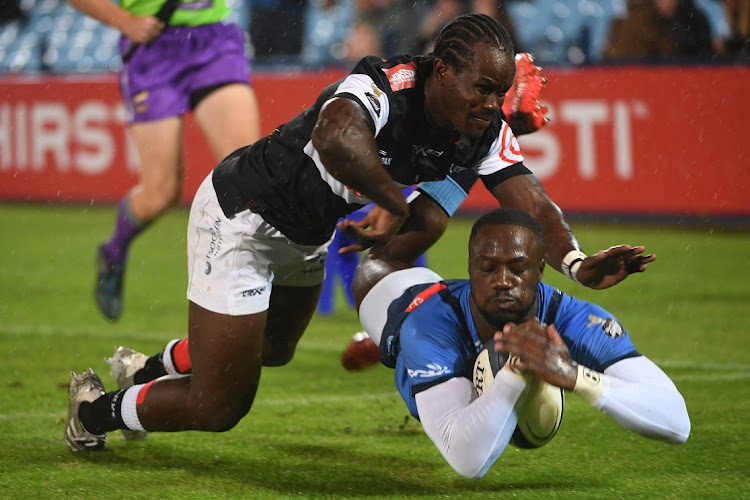 Madosh Tambwe of the Bulls during the Currie Cup match againnst the Sharks at Loftus Versfeld in Pretoria on March 16 2022.
Image: Lee Warren/Gallo Images

An experienced Bulls ended the Sharks’ unbeaten Currie Cup run by defeating them 35-21 at Loftus Stadium in Pretoria on a rainy Wednesday night.

Madosh Tambwe, Keagan Johannes, Arno Botha and Elrigh Louw scored for Bulls, who also had a penalty-try come their way, while Murray Koster and Marnus Potgieter were on the scoresheet for the Sharks.

The Bulls called up some of their United Rugby Championship (URC) stars for the game to signal their intent to defend the Currie Cup title that they have won twice in a row.

The Bulls defeated the Durban-based franchise in both finals to win the past two Currie Cup titles.

The Sharks went to half time leading 18-14 despite having been reduced to 13 men after the No8 Celimpilo Gumende and towering lock Hyron Andrews were sent to the naughty chair on 16 and 17 minutes respectively.

The Sharks drew first blood after just a minute through young centre Koster but a try by impressive Tambwe on nine minutes and a conversion gave the hosts a lead for the first time on the night.

While the Sharks were pushing for a comeback, they were dealt a blow as Gumede, who has had a good Currie Cup season, was yellow-carded for diving on a player on the ground.

When the Durbanites were still trying to deal with  that, they had a double whammy of Andrews being sin-binned for collapsing a maul and the Bulls were awarded a penalty try.

However, the Pretoria-based franchise failed to use their numerical advantage and allowed the Sharks to reduce the deficit and later regain the lead when Marnus Potgieter scored eight minutes before the break.

The Stormers may have regular captain Steven Kitshoff back from his short break but they will have to come to terms with the absence of reserve ...
Sport
4 months ago

Apart from the home team not being able to capitalise when playing against the side that was two men down, the Bulls gave away at least five penalties in the first 40 minutes.

But the Sharks' young flyhalf Jordan Chait could only send two through the poles.

The Sharks also dominated the scrums in the opening half while the Bulls got the better of them in the line-outs.

The Bulls made a strong start in the second half as they scored three tries through scrumhalf Johannes, Botha and Louw.

The KwaZulu-Natal outfit started to give away too many penalties but veteran pivot Morne Steyn, who contributed eight points through his boot, surprisingly missed his two kicks to the poles in two minutes.

The Sharks could only manage three points, which came from an Inny Hadebe penalty in the second half.

The Cheetahs remain the only unbeaten side in the tournament so far after their 24-17 win over Western Province early on Wednesday. The Griquas also returned to winning ways thumping the Lions 49-17.

“So you just have to bring it every weekend, whether you’ve played 100 senior games or are just a young player in his third game. You bring it and ...
Sport
4 months ago

SA Rugby have stuck to their guns and defended the decision not to suspend CEO Jurie Roux despite an arbitrator having found he misappropriated funds ...
Sport
4 months ago

The SA Rugby Union on Tuesday advised that a review of the outcome of the appeal into the arbitration hearing between their CEO Jurie Roux and his ...
Sport
4 months ago