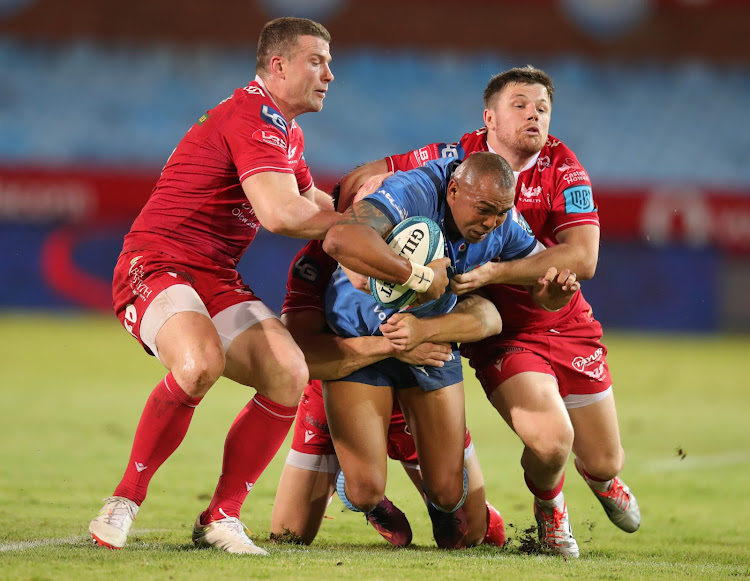 Cornal Hendricks of the Bulls challenged by Steff Evans (l) of the Llanelli Scarlets during their United Rugby Championship match at Loftus.
Image: Samuel Shivambu/BackpagePix

The Bulls powered to a 57-12 United Rugby Championship (URC) win over the Scarlets at Loftus Versfeld on Friday night.

The bonus point win put them at the top of the SA conference in the competition but the Sharks and the Stormers may well alter the pecking order later this weekend.

Either way, the Bulls were in a class of their own against the Scarlets who at no point looked like toppling the apple cart. The Scarlets spent the bulk of the match on the back foot.

The Bulls overwhelmed their opponents from the outset. The visitors routinely found themselves back pedalling as the hosts put them under pressure in the primary phases but alarmingly they were also a step off the pace in general play

To be fair, the visitors gave a much better account of themselves in the third quarter but the Bulls had by then inflicted the bulk of the damage. Jake White's team found another gear in the final quarter.

They had established a 31-7 lead by the break but they struggled to find the same fluidity to their game early in the second half.

The Bulls eventually broke free and rattled up 50 points through additional second half tries by Marcell Coetzee and Robert Hunt.

The news of a season ending injury to captain Jaco Kriel will come as a significant blow to the Lions in the lead-up to their United Rugby ...
Sport
4 months ago

The Stormers may have regular captain Steven Kitshoff back from his short break but they will have to come to terms with the absence of reserve ...
Sport
4 months ago

Talented World Cup-winning Springbok wing Sbu Nkosi may be lost to the Sharks and one of his potential destinations could be bitter rivals the Bulls.
Sport
4 months ago