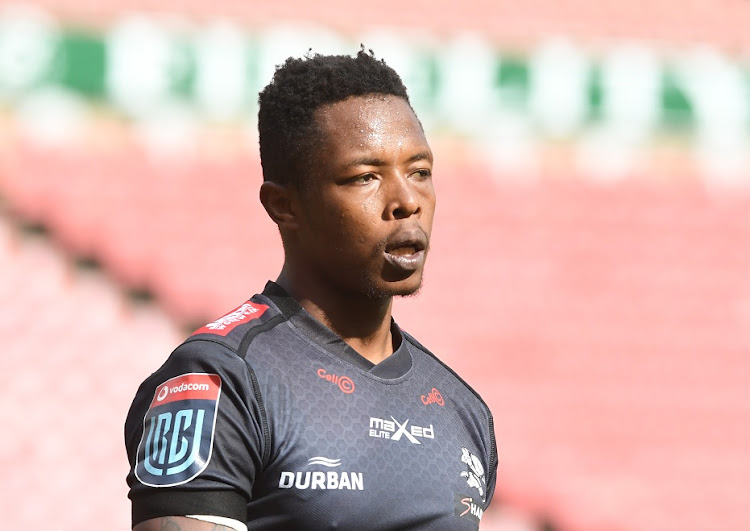 S'bu Nkosi of the Sharks during the United Rugby Championship match against the Lions at Ellis Park on January 22 2022.
Image: Sydney Seshibedi/Gallo Images

Sharks coach Sean Everitt has explained the continued absence of wing Sbu Nkosi who has been linked to the Bulls and is set to miss the side’s United Rugby Championship (URC) clash against Edinburgh.

The Durban-based franchise will be looking to maintain their excellent run of four victories in a row when they host the Scottish outfit at Kings Park Stadium on Saturday at 5.05pm.

Since the news that there’s a possibility of Nkosi leaving Everitt’s team for the Bulls when his contract ends this year, the 2019 Rugby World Cup-winner has missed the Durbanites’ last two matches.

Former Sevens star Werner Kok has been selected at right-wing in the absence of Nkosi.

He was also not considered for the Edinburgh match on Saturday, but coach Everitt has said that Nkosi’s absence has nothing to do with the talks around his contract and a possible departure from the ‘Shark Tank’.

“Sbu had health issues, he had a gastric intestine virus, and he hasn’t recovered from that and as soon as he has recovered, he will be available for selection,” Everitt said.

“He has obviously been offered to go to the Bulls, but nothing has been put on the paper yet, so nothing is final. There are negotiations that still have to happen as Dr Eduard Coetzee (Sharks CEO) has mentioned.”

A victory for the Sharks against the Scottish men will put them in a good position to achieve their URC knockouts quarterfinals.

The Sharks are currently sixth on the URC log with 36 points while their visitors are fifth with 39 points, but Edinburgh have played one more game than the South Africans.

“The team has gained confidence over the four wins, and I thought last week (against Zebre) our performance was better although we didn’t finish the opportunities that we created,” Everitt said.

“It’s also good for us that we are also able to have some sort of consistency in our selection over the last four weeks. That does help with cohesion.

“The guys are in for it and pretty keen. There’s obviously a lot at stake as far as log points are concerned. Edinburgh are ahead of us and if we can keep on marching, who knows what can happen at the end of the round-robin stages.”

Edinburgh are coming to Durban on the back of a 30-17 defeat to Glasgow Warriors.

Cheetahs coach Hawies Fourie is thrilled that the first part of their mission to conquer the Currie Cup has gone according to plan, but insists ...
Sport
4 months ago

Lions captain Burger Odendaal believes the crowd will have their part to play when the team sets out to maintain their winning momentum in the United ...
Sport
4 months ago

In the run-up to the 2023 Rugby World Cup, Jacques Nienaber would do well to focus on young URC players
Sport
4 months ago