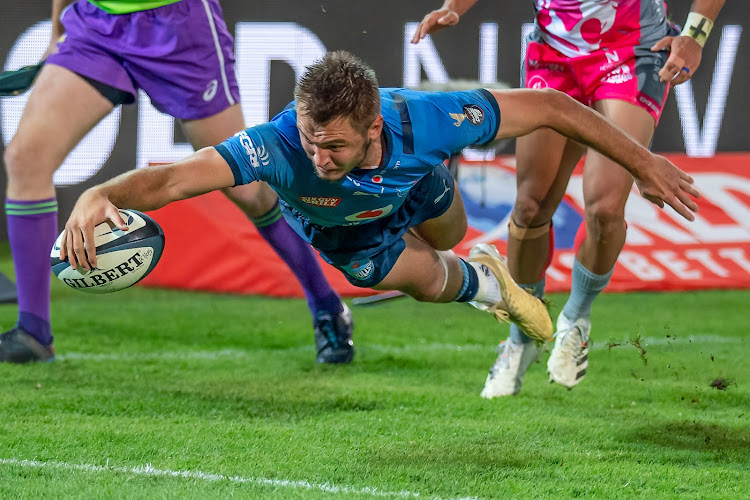 David Kriel of the Blue Bulls scores a try during the Carling Currie Cup match against the Pumas at Loftus Versfeld on May 27.
Image: Anton Geyser/Gallo Images

The Bulls were forced to put in a strong performance in the second half to eventually beat the 14-man Pumas 31-26 in an eventful Currie Cup clash at Loftus Stadium in Pretoria on Friday night.

The match produced nine tries with six of those scored in the first half which also saw two yellow cards and a red card shown to the Pumas and a hat-trick in it as well.

The Bulls’ tries were scored by David Kriel (2), Ruan Vermaak, James Verity-Amm and they also had a penalty try. Sebastien de Klerk (3) and Eduan Swart scored for the Pumas.

The Pumas led 26-12 at halftime after putting in a really good shift which was marred by multiple penalties from the Johnny Stonehouse-coached side.

The men from Mbombela, who needed a victory to boost their playoff chances, scored first through De Klerk in five minutes and he completed his brace eight minutes later as the Pumas took control of the game.

The Bulls were finally able to get on the scoreboard after 17 minutes of play when they were awarded a penalty try and Pumas' hero De Klerk was sin-binned.

However, the men from Mbombela scored their third try through Swart just two minutes after De Klerk was sent to the naughty chair.

The tries kept coming as David Kriel scored seven minutes before the break and the Pumas were reduced to 14 men as Tinus de Beer was sent off for a dangerous tackle on Richard Kriel in a build-up to the try.

However, another try from De Klerk restored the Pumas’ 14-point lead into the break at Loftus.

With the Pumas one man down, it was going to take a miracle to stop the powerful Bulls from staging a comeback.

The Bulls ran in three tries  — scored by Vermaak, Verity-Amm and David Kriel who completed his brace in the second half.

The Pumas had a try overturned by television match officials due to a suspected flying wedge.

The visitors' chances of any comeback were thrown out the window when wing Tapiwa Mafura was sin-binned for a dangerous foul on David Kriel with 13 minutes to play.

The referee, Marius van der Westhuizen, and TMO didn’t agree on the foul, but the former went ahead and sent Mafura to the naughty chair.

The Bulls also had Juan Mostert being yellow carded with two minutes left to play, but the Pretoria-based side held on for the 31-26 win.

The Pumas have moved into the top four on the log, thanks to the couple of bonus points achieved at Loftus.

Jacques Nienaber has confirmed the Springbok squad for the three Tests against Wales will be announced after the United Rugby Championship (URC) late ...
Sport
1 month ago

“There is an internal investigation and those we identify as being responsible for this incident will be dealt with,” Bishops headmaster Tony Reeler ...
News
1 month ago

The Springboks need to put on a show of force against Wales, just like Mallet’s marauders in 1998
Sport
1 month ago