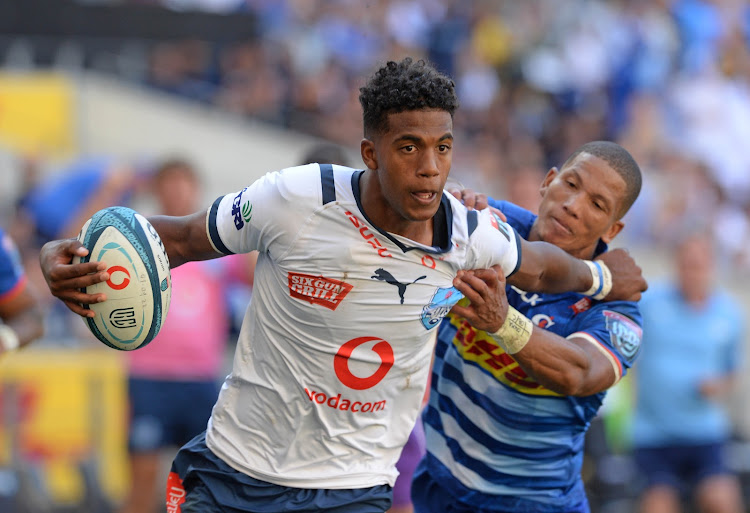 Canan Moodie of the Bulls in a tussle with Manie Libbok of the Stormers during their United Rugby Championship clash at Cape Town Stadium.
Image: Ryan Wilkisky/BackpagePix

The Bulls’ in-form utility back Canan Moodie has been named in the Junior Springboks squad that will represent SA in the Under-20 Six Nations Summer Series in Italy.

The tournament is set to be staged in the European country from June 24 to July 12 where SA and Georgia will battle it out against the Six Nations sides.

Moodie has been in sublime form and a big contributor for the Bulls in their run-up to the United Rugby Championship (URC) quarterfinals.

Bulls coach Jake White has declared utility back Canan Moodie as the “real deal” after his breakthrough campaign where he has established himself as ...
Sport
2 months ago

Those players are Bulls lock Reinhardt Ludwig; the Stormers’ Sacha Mngomezulu, who made his URC debut at the weekend; his teammate Connor Evans (lock); and the Lions duo of scrumhalf Nico Steyn and loose forward Ruan Venter.

Junior Boks coach Bafana Nhleko said he was pleased with the composition of the squad and believes it is well balanced and competitive.

“We are grateful for the domestic U-20 competition earlier this year that gave us an opportunity to see the players and select the academy group,” Nhleko said.

“We have a few guys who have gained valuable experience in the senior ranks, as well as a number of returnees from last year’s programme.

“Putting in the hard work on the training field is one thing, but actually playing in real matches, especially against experienced senior players, provides even better preparation.

“It was good in terms of seeing how we handle pressure situations and execute our plans against highly organised teams, hence the training matches against the likes of the Stormers, Western Province, Griquas and Cheetahs, to test the players in proper match conditions.”

Nienaber starts prepping for Bok season with camp in Pretoria

Nhleko’s men will open their Summer Series against England on Friday June 24, and that will be followed by their second match, against Ireland on Wednesday June 29.

The South Africans will complete their pool fixtures on Tuesday July 5 against France before playing a final cross-pool fixture one week later, on Tuesday July 12, with their opponent to be determined according to the final standings.

“The Six Nations teams have the benefit of regular international competition between themselves, so other than our intensive high-performance programme, we had to find a way of offering quality game time to our group,” Nhleko said.

Stormers book their place in the URC semis

The Springboks will start preparations for the coming season with a camp involving 17 players in Pretoria from Monday.
Sport
2 months ago

Stormers good enough, but plenty to fix for URC semifinal

It wasn't their most accomplished performance but the Stormers have found ways of troubleshooting their way to victory.
Sport
2 months ago

Stormers storm URC semifinals with win over Edinburgh in CT