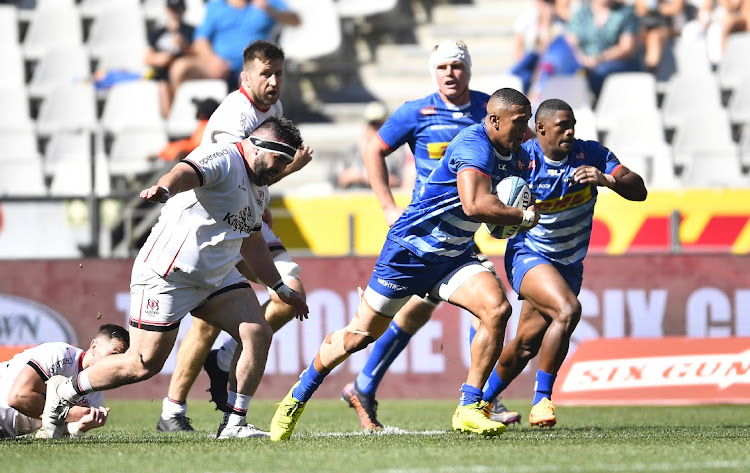 Top try-scorer Leolin Zas was one of five Stormers to crack the nod in the URC's Dream Team. In close attendance here is Warrick Gelant who was also selected in the side.
Image: Ashley Vlotman/Gallo Images

SA players dominate the United Rugby Championship Dream Team with five players from the Stormers making their way into the select XV.

The Lions are the only South African franchise not represented in the team that was selected by a panel of rugby scribes from the competition's different territories.

The team that was essentially selected based on performances in the league stages of the competition features 10 South Africans and, perhaps curiously, just one player from Leinster, which topped the points table after the regular season.

Players had to have made a minimum of nine appearances to be considered, with the media panel given a shortlist of 10 players per position, provided by URC StatMaster. The player with the most votes in each position earned a place in the team.

After a slow start SA teams made an impression once they started playing at home in the URC. The fact that three SA teams made the knockout stages may have influenced the voting panel.

Fullback Warrick Gelant, who was injured for parts of the campaign, top try-scorer left-wing Leolin Zas, right-wing Seabelo Senatla, inside centre Damian Willemse and No8 Evan Roos are the Stormers who cracked the nod.

Flank Marcell Coetzee, Lock Ruan Nortje and hooker John Grobbelaar were the selections from the Bulls, while Sharks' props Ox Nché and Thomas du Toit also made it in.

Nortje was named Ironman of the competition for the sheer amount of time he spent on the pitch.

The Stormers' transformation from also rans to a team of contenders in the inaugural United Rugby Championship has puzzled many rugby observers.
Sport
2 months ago

As things seem to be looking up for the Cheetahs, their CEO Ross van Reenen has revealed if it wasn’t for sizeable financial backing they received ...
Sport
2 months ago

The Bulls’ in-form utility back Canan Moodie has been named in the Junior Springboks squad that will represent SA in the Under-20 Six Nations Summer ...
Sport
2 months ago