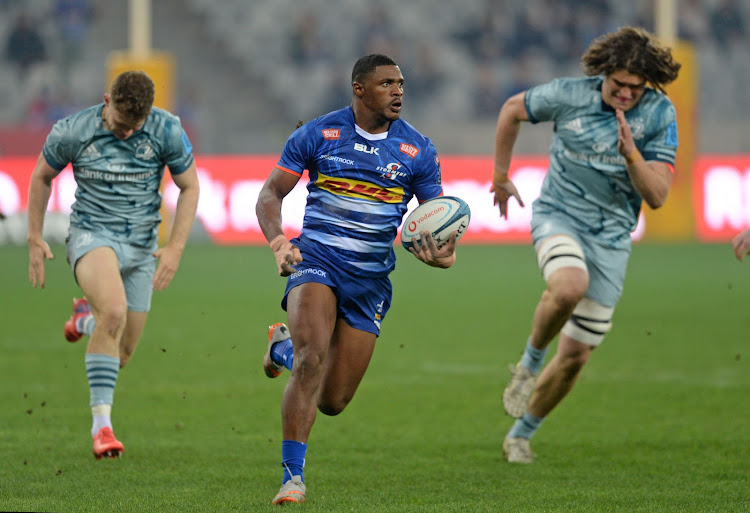 Warrick Gelant of the Stormers in action during the United Rugby Championship against Leinster at Cape Town Stadium. Gelant has helped propel the Stormers into the final.
Image: Ryan Wilkisky/BackpagePix

The metamorphosis of the Stormers this season is perhaps best illustrated in the way their team has changed from the start of the United Rugby Championship (URC) to the one they will send into battle at Cape Town Stadium for the competition's climax on Saturday.

The Stormers, quite remarkably, have turned around their fortunes from a franchise potentially facing foreclosure and one treading water on the field to one within touching distance of bagging the most prized club trophy contested across the hemispheres.

Their transformation has partly been shaped by the fact that only seven players who were in the starting line-up in Treviso in their defeat to Benetton at the kick-off of the URC in September are in the first XV for the final against the Bulls. Only two of the substitutes of the opening day remain.

Of course the Stormers did not have their Springboks who were unavailable for selection then, but seven starting team survivors still represents a low return.

That number would have been six had Sergeal Petersen, who played in the Stadio Comunale di Monigo, not cracked the nod for the final after Leolin Zas was ruled out by injury.

His introduction is the only change to the team that beat Ulster last week, while Junior Pokomela is included on the bench with Adre Smith unavailable through suspension.

Though more than half the team has changed since the start of the competition the Stormers boast continuity in key areas at fullback in Warrick Gelant, centres Damian Willemse and Ruhan Nel, flyhalf Manie Libbok, No 8 Evan Roos and loosehead prop Steven Kitshoff.

During the course of the season tighthead prop Neethling Fouche, flankers Deon Fourie and Hacjivah Dayimani, as well as lock Marvin Orie and wing Zas became permanent fixtures as the Stormers developed the backbone of the team that has now won 10 games in a row.

When fit, the contributions of Springboks Frans Malherbe and Herschel Jantjies should not be underestimated.

One could argue is wasn't so much the return of their Springboks as the contributions of the men outside the national squad orbit for much of the season that has brought about the big switch for the Stormers.

Apart from Gelant's trickery and Zas's try scoring prowess, the area in which the Stormers really distinguished themselves is in the back row where Fourie's poaching ability and general nuisance factor wonderfully complemented Roos's powerful ball carries and Dayimani's highly dexterous link play.

Perhaps fittingly Fourie, who earned 84 caps before leaving for France for seven years, is down to play his 100th game for the Stormers on Saturday. His performances have earned him a call up to the Springbok squad.

“Deon embodies a lot of what we pride ourselves in as a team,” said coach John Dobson. “Playing for the Stormers means a lot to Deon and it means a lot to the rest of us that he reaches this milestone on such a big occasion. He deserves all the accolades coming his way.”

Dobson knows though they have home ground advantage, a 10-match winning run and boast two victories over the Bulls in this season's URC, his team will probably have to play their best game of the season to lift the trophy.

“We are up against our old rivals in a home final, so you can be sure we will be ready to give it everything we have and hopefully make our supporters proud,” said Dobson.

Botha talks down his final game

Bulls flank Arno Botha does not want to hype Saturday's United Rugby Championship (URC) final as his last for the franchise.
Sport
2 weeks ago