Petersen back for show piece clash 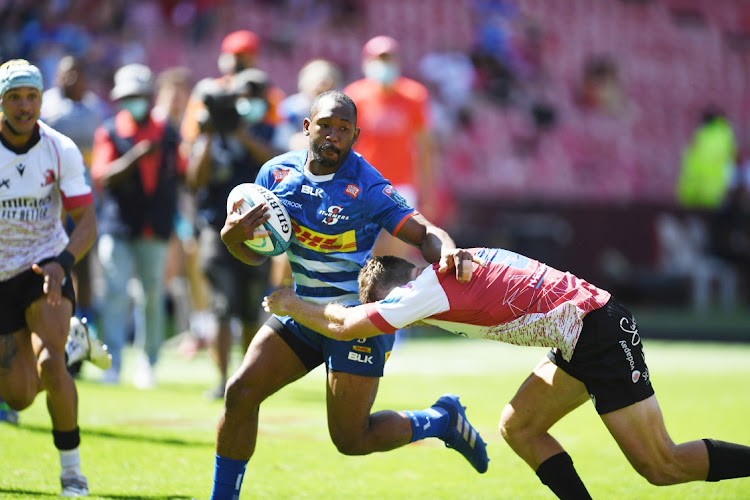 Sergeal Petersen is set to return to the Stormers' starting line-up for the URC final against the Bulls. Here he is in action against the Lions at Ellis Park.
Image: Lefty Shivambu/Gallo Images

From the pound seats, through a midterm slump and finally restoration among the finishers for the United Rugby Championship's (URC) show piece match reveals only part of Sergeal Petersen's storied season.

He owes much of his selection for Saturday's URC final against the Bulls in Cape Town to the injury that forced Leolin Zas off the field in the semifinal against Ulster last weekend. Zas has been in outstanding form, leading the competition's try-scoring chart but also providing the team much impetus up the left flank with determined surges with willing support runners in close attendance.

His leg injury has however provided Petersen a lifeline but it's not as if the former sprinter is devoid of form. He was one of Western Province's star performers in last week's Currie Cup win over the Sharks.

Stormers coach John Dobson has revealed Petersen is the man to fill the boots vacated by Zas.

“I don’t want to play any games. Sergeal will play on the wing this weekend,” said Dobson.

His selection has found favour with the player from who he is likely to benefit most.

“Warrick (Gelant) likes the idea of playing with Sergeal, who is a good communicator,” explained Dobson.

“Warrick can pass to him and Sergeal can make a decision and he can produce some magic. I don’t think it’s much difference in the overall shape of the team. What is good for me is that they are both good under the high ball,” said the coach.

As such Petersen is also well capable of playing at fullback which gives the Stormers more flexibility in their back division.

Petersen was the man in possession at the start of the campaign but Zas got a start in a nine-try rout against Zebre in Stellenbosch in March. The wings feasted, dotting down five times with Zas scoring twice and Seabelo Senatla running in three tries.

“We gave Zas a game against Zebre and he was outstanding. Sergeal was pretty much our No.1 wing until then,” explained Dobson. “My opinion is that he struggled a little bit at the start of the Currie Cup, but he was outstanding on Friday night (against the Sharks) in Stellenbosch.”

Petersen is likely to play on the right wing with Senatla switching to the left.

Apart from wing the Stormers will also be forced into a change on their bench with lock Adre Smith serving a ban as a result of the red card he received for eye-gouging in the semifinal.

“He got a red card, so he is not eligible for selection until that process is finished,” said Dobson.

Ernst van Rhyn looks likely to change his role from loose forward to lock replacement, while Junior Pokomela is also set to make his way onto the bench.

The Stormers will name their team on Friday.

Botha talks down his final game

Bulls flank Arno Botha does not want to hype Saturday's United Rugby Championship (URC) final as his last for the franchise.
Sport
2 weeks ago