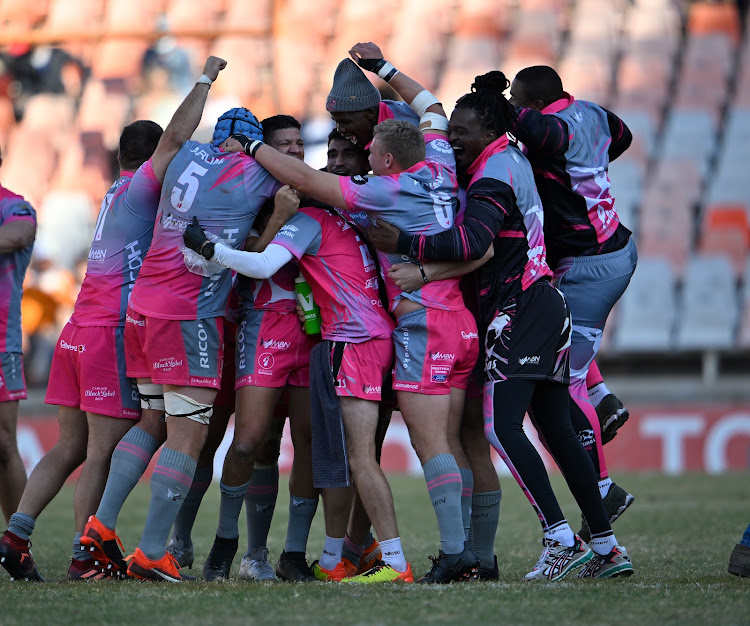 The Pumas celebrate after beating the Cheetahs during the Carling Currie Cup semifinal at Toyota Stadium in Bloemfontein.
Image: Johan Pretorius/Gallo Images)

The Griquas will host the Pumas in Kimberley on Saturday in a final between two teams that were given little or even no chance at the beginning of the season.

The Griquas beat the Bulls on Friday night in Tshwane and the Pumas staged a late fightback to stun the Cheetahs 38-35 on Saturday at the death to set up this unlikely final.

For the tournament romantics, this will be the first Currie Cup final appearance for the Griquas in 52 years while the Pumas will be appearing in it for the first time in their history.

It is also a massive achievement for coaches Pieter Bergh of the Griquas and Jimmy Stonehouse of the Pumas who operate on small budgets and lose players every season.

'I was sick and tired of talking about 1970,' says coach Pieter Bergh as Griquas reach first Currie Cup final in 52 years

After leading the Griquas to their first Currie Cup final in 52 years, coach Pieter Bergh hopes his current team can match the franchise’s great ...
Sport
2 weeks ago

They have outdone themselves to perform better than bigger franchises in the form of the Bulls, Sharks, Lions, Western Province and Cheetahs.

This match was heartbreak for the Cheetahs, who have been the most consistent team of the tournament, as they were pipped by Ali Mgijima’s converted try at the death.

The visitors got onto the scoreboard first when Eddie Fouché went over the line for the game’s opening try but the home side responded through Jeandré Rudolph who powered home at the corner.

The visitors retook the lead with back-to-back tries from Sebastian de Klerk who took advantage of some sloppy defending and poor communication by the Cheetahs.

After De Klerk’s first try around the 20th minute, the Cheetahs suffered a massive blow when their inspirational captain and reliable kicker Ruan Pienaar walked off the field with a suspected thigh injury.

Utility back George Whitehead came off the bench to inspire the Griquas to secure a place in the Currie Cup final as the men from Kimberley defeated ...
Sport
2 weeks ago

As a result of De Klerk’s two tries, the Pumas enjoyed a 10-point lead but it could have been more if Fouché did not miss both the conversions and a penalty in between.

Fouché’s three consecutive misses cost the Pumas seven crucial points and an opportunity to put the Cheetahs under pressure.

Shortly before the break, the scores were level after the Cheetahs were awarded a penalty try by referee Morné Ferreira and Siya Masuku scored his first penalty as Fouché’s missed kicks came back to haunt them.

The Cheetahs went to the break with a seven-point lead after Clayton Blommetjies scored after a brilliant attacking move.

The Cheetahs increased their lead in the second half when Rudolph registered his second try and Masuku put away his second penalty.

The Pumas dragged themselves back into the game through a try by Giovanne Snyman but Masuku responded soon afterwards with his third penalty.

The Cheetahs lost Rosko Specman to a yellow card after 75 minutes and the Pumas took advantage immediately with two late tries by Simon Raw and Mgijima.

It's all systems go for the hugely anticipated and inaugural United Rugby Championship (URC) final between the Stormers and the Bulls at Cape Town ...
Sport
2 weeks ago

Bulls vice-captain and loose-forward Arno Botha is expecting a physical battle when they meet the Stormers in the United Rugby Championship (URC) ...
Sport
2 weeks ago